Yesterday, WVU’s Bureau of Business and Economic Research hosted its annual West Virginia Economic Outlook Conference. Both the Gazette and Daily Mail had good coverage of the event, where economists from WVU and the Federal Reserve Bank of Richmond predicted both the U.S. economy and West Virginia’s economy would grow over the next few years, but at at fairly slow pace.

Below is the employment forecast for West Virginia from the West Virginia Economic Outlook 2012, which was distributed at the conference, as well as historical employment numbers.
WV Employment Forecast (thousands) 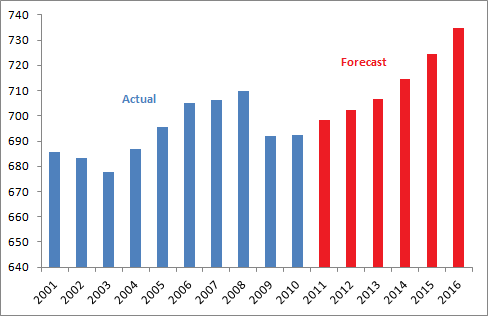 Source: WVU BBER and BLS QCEW
According to the forecast, West Virginia should add 42,500 jobs between 2010 and 2016, putting employment back at pre-recession levels sometime in 2014, between 6 and 7 years after the recession began. Job growth is projected to be slow in the first two years of the forecast, and pick up in pace thereafter.
Next up is the unemployment rate forecast for West Virginia.
WV Unemployment Rate Forecast

All economic forecasts, including these are subject to a certain degree of uncertainty, and making economic projections is not a cut and dried science. A look at past forecasts can help illustrate this uncertainty. Again, I’ll start with the employment forecasts. 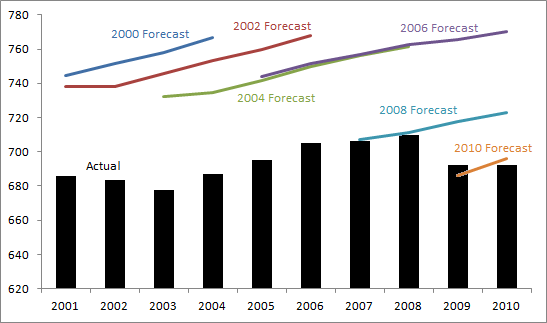 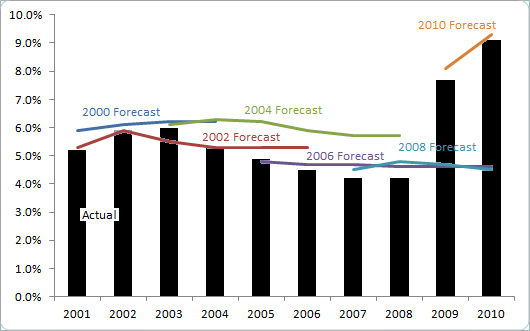 Source: WVU BBER and BLS LAUS
In the case of the state’s unemployment rate, the forecast tends to project a slightly higher unemployment rate than what the state eventually has. This was the case until the recession began to take hold in the state, which the forecasts didn’t show until the recession was in full swing.
So what do these trends mean for West Virginia’s outlook. It’s hard to predict the future, and an event like the last recession can throw everything out the window. Barring another major economic meltdown (like the Europe debt crisis spiraling out of control), West Virginia will probably see minor job growth in the next few years. But based on the forecast’s past performance, the acceleration of job growth towards the end of the projection is probably a little optimistic.