West Virginians Will See Cuts to Food Assistance This Fall

350,000 people in West Virginia will see a cut in their food assistance benefits this fall, when a temporary boost to the Supplemental Nutrition Assistance Program (SNAP, formerly known as food stamps) is set to expire, according to new data released by the U.S. Department of Agriculture (USDA) discussed in a new report from the Washington, DC-based Center on Budget and Policy Priorities. 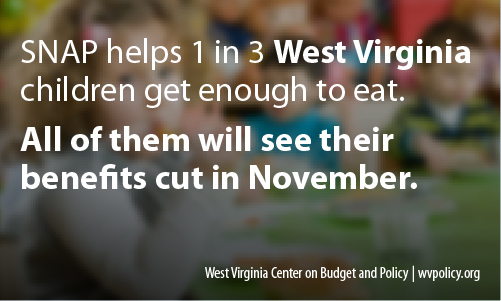 All of the more than 47 million Americans, including 22 million children who receive SNAP will see their food assistance reduced, when a modest boost in benefits to SNAP recipients that policymakers included in the American Recovery and Reinvestment Act (ARRA) to strengthen the economy and ease hardship expires on October 31. For a family of three, that cut will mean a reduction of $29 a month— $319 for the remaining 11 months of the fiscal year. This is a serious loss for families whose benefits, after this cut, will average less than $1.40 per person per meal.

“This small increase in SNAP benefits has helped thousands of struggling families in West Virginia stay afloat during the worst economic crisis since the Great Depression,” stated Ted Boettner, Executive Director of the West Virginia Center on Budget and Policy. “For many of these families, this modest assistance is providing a lifeline to those who are struggling to find work, or are working at jobs that do not pay them enough to put food on the table.”

In addition to helping to feed hungry families, SNAP is one of the fastest, most effective ways to stimulate a struggling economy. Every $1 increase in SNAP benefits generates about $1.70 in economic activity. The across-the-board cuts scheduled for November will reduce the program by $5 billion in fiscal year 2014 alone. Cuts of that magnitude will have a significant impact on low-income families.

Boettner continued, “SNAP has never experienced a reduction in benefits that impacts all participants, including 22 million children nationwide. Given the fact that benefits are already inadequate for many families, these cuts will be particularly painful.”

On top of these across-the-board cuts to the program, the U.S. House of Representatives recently defeated legislation that would have cut $20 billion from SNAP, eliminating food assistance for nearly two million people. That legislation would have provided strong financial incentives to states to reduce their caseloads. This could leave many families and their children without assistance to put food on the table when they need it most. The House is considering and could vote on even deeper cuts to the program in the coming weeks.

“SNAP has been a powerful tool in helping to keep families out of poverty,” stated Boettner. “The majority of SNAP recipients who are able to work, do so. And for those who can’t or are temporarily unable to find a job, SNAP has helped to give them a leg up. Now is not the time to further reduce this already modest assistance to these struggling families.”

The Center on Budget and Policy Priorities’ full report, SNAP Benefits Will Be Cut for All Participants in November 2013, can be found at: http://www.cbpp.org/cms/index.cfm?fa=view&id=3899.

The West Virginia Center on Budget and Policy (www.wvpolicy.org) is a public policy research organization that is nonpartisan, nonprofit, and statewide. The Center focuses on how policy decisions affect all West Virginians, especially low- and moderate-income families.