West Virginians rejoice!  Rarely does our Mountain State top national rankings on good measures, but a report out this week shows that West Virginia, along with two other states, leads the country in the percent of uninsured state residents who will qualify for health insurance assistance due to Obamacare. Now, before you let your initial partisan reaction get the best of you, take a moment to consider the map below: 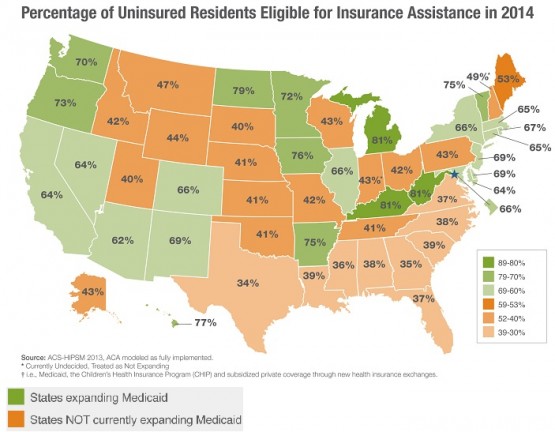 West Virginia, along with Michigan and Kentucky, will see 81 percent of its currently uninsured residents receive some sort of assistance in getting health insurance, either by qualifying for Medicaid or tax-subsidies in the Marketplace.  This is not small news.  Currently, there are an estimated 270,000 West Virginians without health insurance.  Based on this report, around 219,000 of them will qualify for assistance which is a pretty big deal since cost is overwhelmingly the number one reason why the uninsured don’t have health coverage.

The flip-side of this is a state like Texas, where only 34 percent of its currently uninsured residents will receive any sort of assistance, and that will strictly come in the form of tax credits on the Marketplace since Texas Governor Rick Perry opted not to expand Medicaid, purely in an effort to defy President Obama.  Texas leads the country in the number and percentage of uninsured state residents, where more than 25 percent of Texans don’t have health insurance, including an embarrassingly high 17 percent of children! Perry’s decision not to expand Medicaid in a state with over six million uninsured residents, 1.7 million of whom earn less than 138 percent of the Federal Poverty Level and would therefore qualify for expanded Medicaid, means that 1.7 million Texans, nearly the entire state population of West Virginia, will be too poor to qualify for assistance.  Yes, you read that right, these people will be too poor to get assistance from their government.

Fortunately, we don’t live in Texas and we have a governor and state legislature who were able to look beyond the Obama in Obamacare long enough to see that expanding Medicaid was both the right thing to do for our most vulnerable West Virginians and the economically smart thing to do for the state and its labor force.

Cheers to being on top of a good national ranking!