Last week, the CDC released new data from its biennial Youth Risk Behavior Surveillance System (YRBSS).  The YRBSS surveys thousands of middle and high school aged youth across the country, questioning them about a number of health and behavioral risk factors, everything from diet to alcohol use to sexual activity.  The survey is large enough to give a clear picture of behavior among youth across the country and how it varies by state and region.

The new data provide some interesting insight into the behavior of West Virginia youth and how they compare to their national counterparts. While there are certainly some promising trends in West Virginia, such as the plummeting use of meth (surprising, right?), there are also a number of very worrisome results of which we must be aware.

Tobacco use is overwhelmingly the factor that jumps out the most. While high school age smoking has dropped dramatically in West Virginia and across the country since the early 1990s, West Virginia remains significantly behind the rest of the country in both the rate of declining use and the number of teens who currently smoke. 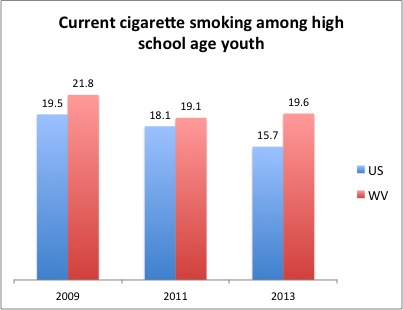 The figure above shows the trends of high school age youth who are current smokers since 2009.  As you can see, nationally this rate has declined from 19.5 percent of high schoolers to 15.7 percent, a drop of nearly 20 percent.  In West Virginia however, the drop has not been nearly so steep and, in fact, has ticked up slightly since the last survey in 2011. At 19.6 percent, West Virginia high schoolers are 25 percent more likely to smoke than their peers across the country.

Another factor where West Virginia’s youth does poorly is in soda consumption. Regular soft drink consumption is known to increase the risk for a number of health conditions such as obesity, diabetes, and dental cavities. West Virginia youth drink much more soda than American youth on the whole. High schoolers here are 40 percent more likely to drink at least one soda per day and 67 percent more likely to drink three or more sodas per day.  The figure below highlights these differences: 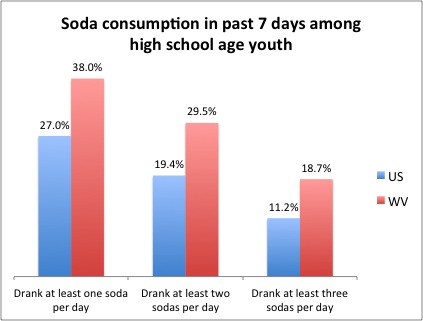 Other factors where West Virginia youth behaviors were significantly worse than the national average include being sexually active, not using a condom during most recent sexual intercourse, wearing a seat belt, and attending physical education classes in school. The table below lists every factor in which West Virginia’s youth reported unhealthier or riskier behaviors than their peers nationally: 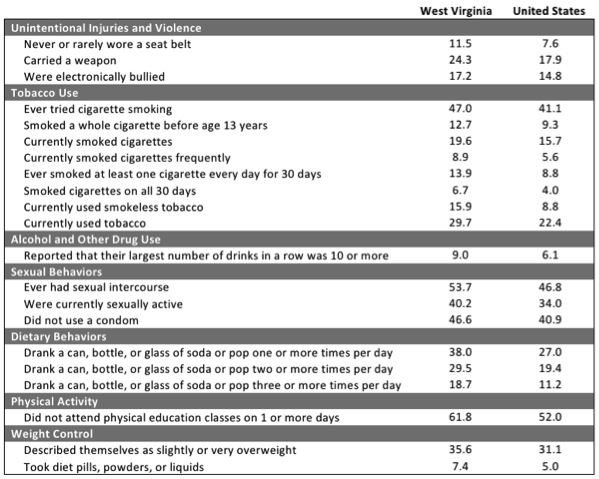 On most other issues like alcohol use, illicit drug use, and diet, West Virginia’s youth fell around the national median. Of course, regardless if it’s about the same as the national rate, the fact that kids are still participating in many of these behaviors is something to worry about, such as the five percent of West Virginia high schoolers who have used cocaine.

Why does any of this matter?  Because we know that most health behaviors are established early in life and if we don’t get this ship turned around for our youth, then we’re going insane if we expect to have healthier adults.