The passage of the 2010 Affordable Care Act (ACA) included a little-heralded provision to permit states to expand coverage of the Children’s Health Insurance Program (CHIP) to children of public employees. So far, at least seven states have benefited from allowing public employees to enroll their children in CHIP. If West Virginia were to adopt this change, up to 8,800 West Virginia children could be eligible, potentially saving the state and its public employees tens of millions of dollars while providing more comprehensive health coverage to thousands of children. Read PDF of report.

Since 1997, the Children’s Health Insurance Program (CHIP) has provided health insurance for children in families whose incomes were too high to qualify for Medicaid but who did not have other coverage. To be eligible for CHIP in West Virginia, children under the age of 19 must live in households with incomes under 300 percent of the Federal Poverty Level (FPL). Medicaid covers children under 100 to 150 percent of FPL depending on age, and, beginning in 2014, will cover children and adults of any age up to 138 percent FPL. Children under the age of one will continue to qualify up to 150 percent of FPL.

The Public Employees’ Insurance Agency (PEIA) provides health insurance coverage for over 200,000 people across West Virginia, most of whom are state and local government employees and their families. Approximately 30,600 children under age 19 are enrolled in PEIA.

When CHIP was first established, federal rules prohibited children of state and local employees covered by public employees’ insurance from enrolling in CHIP. With the passage of the ACA in 2010, however, this restriction was lifted. To date, at least seven states across the country have adopted the change to varying degrees, including Alabama, Georgia, Kentucky, Montana, Pennsylvania, Texas, and Vermont.

• In its first year, Georgia enrolled over 14,000 dependent children of public employees into its CHIP program, PeachCare, saving an estimated $16 million in 2012.

• Kentucky reports having approximately 1,500 children of state employees enrolled in KCHIP in any given month, saving $2 million in general fund dollars every year.

• Alabama has enrolled around 5,700 Public Employee Dependents, or PEDs, into its ALLKids program, or about seven percent of its total ALLKids enrollment.

• According to its 2012-2013 Biennial Recommendations, Texas estimated that the change would save a total of $16.2 million in General Revenue Funds. Approximately 6,500 children of public employees have been enrolled in Texas.

While many PEIA children would qualify for CHIP, it is unclear exactly how many children would make the switch from PEIA to CHIP. This is largely because of two central factors: a lack of available data to determine PEIA household size and income, and knowing how many CHIP-eligible families would enroll.

The next two sections use the best available data to estimate potential eligibility for PEIA children in CHIP and potential cost-savings for the state and PEIA member families.

How Many PEIA Children Could Qualify for CHIP?

The estimate in Table 1 assumes that the percent of West Virginia children who live in households with CHIP-qualifying incomes is the same for children covered by PEIA. According to the 2012 Current Population Survey, approximately 116,500 children in West Virginia, or nearly 29 percent, are theoretically eligible for CHIP (139-300 percent FPL range) in 2014. Using this rate, up to 8,800 of the 30,600 children under the age of 19 currently enrolled in PEIA would be CHIP eligible.

This projection may overestimate the number of CHIP-eligible PEIA dependents as households with at least one parent employed in the public sector may have a higher household income than the general population. However, according to Workforce West Virginia, the average annual salary for state and local workers in 2012 was $2,874 lower than that of private-sector workers.

How Much Could the State and PEIA Members Save Switching to CHIP?

Table 2 shows the average monthly costs for children in CHIP and PEIA. The average monthly plan costs per enrollee for PEIA is $145.34 for those under 18 years old, of which about 65 percent ($95.84) comes from state or local funds while the remaining 35 percent ($49.50) is contributed by the member in the form of monthly premiums, co-pays, and co-insurances.

Since CHIP has lower cost-sharing ($4.69) and no monthly premium for the typical enrollee, the member could save an average of $44.81 per month or $538 per year for each child who switches.

The total annual cost-savings would depend largely on how many PEIA children enroll in CHIP. For example, if all of the projected PEIA children who qualified (8,800) switched to CHIP, then annual cost-savings would be $6.7 million to state and local governments and $4.7 million to PEIA member families. If participation were the same as the current CHIP take-up rate of 21.4 percent (24,950 enrollees of 116,500 eligible children), around 1,880 would enroll in CHIP with an annual cost-savings of $1.4 million for state and local governments and nearly $1 million for PEIA member families.

Figure 1 illustrates the cost-savings to the state and PEIA members by looking at different levels of participation. 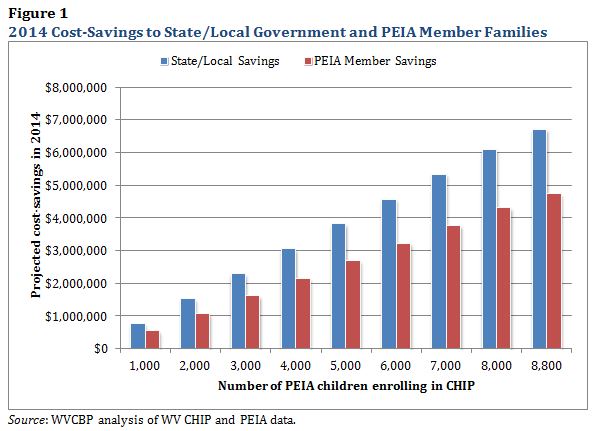 Even at lower participation rates, total cost-savings become more substantial over time, especially when considering the enhanced CHIP match scheduled to begin in 2016 which will increase state/local savings by $388 per dependent. If 1,000 children switched coverage to CHIP, total savings would top $10 million for state and local government and $5 million for families over the next ten years (2014-2023). This could be expected to be even more when adjusting for the average annual growth in health care costs.

There are numerous factors that determine the number of children who would be eligible or who would enroll in CHIP. For example, PEIA premiums are based on the employee’s income without regard to total household income while CHIP eligibility is determined based on total household income. As such, an employee with a qualifying annual salary may have a working spouse whose income would make the family ineligible for CHIP.

Similarly, parents may be income-eligible for CHIP but find that it is not financially beneficial to enroll their children while maintaining a separate health policy for themselves. PEIA “Family” coverage tier premiums remain the same regardless of the number of dependents covered, while PEIA does not currently offer an “Employee and Spouse” tier. Consequently, parents covered by a PEIA “Family” plan may decide not to switch their child(ren) to CHIP since there would be no corresponding reduction in their monthly premium.

Some families may have access to health insurance through other means such as the spouse’s employer, allowing them to enroll their children into CHIP while opting out of PEIA entirely. Families could also choose to maintain their existing PEIA coverage and still enroll their dependent(s) into CHIP due to the reduced cost-sharing, smaller out-of-pocket maximums, and enhanced dental and vision benefits. There are many variables and costs that parents would have to weigh prior to enrolling their children into CHIP, and each family situation would be unique. However, the creation of an additional PEIA tier providing coverage only for an employee and spouse would reduce the financial barrier that could possibly keep some families from switching.

A View Of Two Families

To help illustrate these different variables, two distinct family scenarios are highlighted in Table 3. In both households, a public employee covered by PEIA has an annual salary of $29,000. Based on CHIP income eligibility levels, children from both families would be CHIP eligible.

Family A would see significant monthly savings in the premium costs alone by switching its children into CHIP. Family A would see additional savings with no annual deductible, and no co-pays for generic prescriptions, standard physician visits, hospital services, or outpatient services. Dental and vision services would also be covered by CHIP, providing further savings. The state would save over $1,500 annually ($2,300 beginning in 2016), while the family would save about $1,075 per year in lower premiums and reduced cost-sharing. It is expected that Family A would enroll its children into CHIP.

Family B would see monthly savings by switching the children into CHIP through lower cost-sharing, no annual deductibles, and no co-pays for generic prescriptions and standard physician visits. Dental and vision services would also be covered by CHIP, providing further savings. However, this family may be unlikely to switch its children to CHIP because its household income is over 200 percent of FPL, putting it into the CHIP “Premium” plan, where it would pay a $35 monthly premium per child, or $70 total per month. Since PEIA does not offer an “Employee and Spouse” type tier, the parents would still need to purchase a “Family” policy to maintain insurance for the adults (assuming no insurance coverage is offered through the spouse), meaning there would be no decrease in their monthly PEIA premiums. Therefore, Family B may decide not to enroll its children into CHIP, costing the state the $1,500 ($2,300 beginning in 2016) in annual savings it would have seen otherwise. However, if an “Employee and Spouse” tier option were available at a lower monthly premium than the corresponding “Family” option, they would be more likely to enroll their children into CHIP, resulting in savings for the state and member. 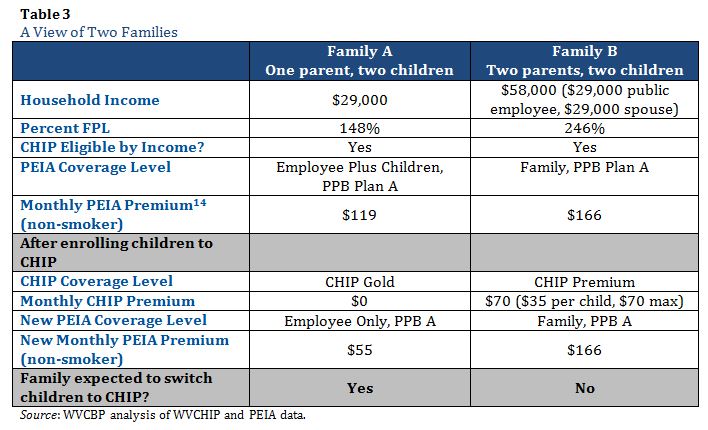 Permitting children of public employees to enroll in CHIP could save both West Virginia and its public workers money while also providing more robust health coverage for many of the state’s children. Although the total savings to the state will vary largely depending on the number of dependents who would switch to CHIP, it could potentially reach into the tens of millions of dollars over the next decade. Additionally, the expected cost-savings to plan members would substantially increase the take-home pay of lower-income state workers with children. Even if fewer children are eligible and enrolled than estimated here, there would still be a cost-savings to both the state and plan members.

The creation of a new “Employee and Spouse” tier of coverage in PEIA would help maximize the number of children who move from PEIA to CHIP. The lack of this option could pose a barrier to many income eligible two-parent families when they are making a decision whether or not to enroll their children into CHIP.

Governor Tomblin should request federal approval to implement this change so that West Virginia can take advantage of this opportunity to save the state and local governments and their public employees tens of millions of dollars in upcoming years. It will help balance state and local budgets and put more money into the pockets of thousands of West Virginia families while improving access to health care for thousands of children in low-income families across the state.