(Charleston, WV) Thousands of West Virginians continued to struggle to make ends meet in 2014, according to new data released today from the U.S. Census Bureau, making it clear the need for West Virginia to enact a state earned income tax credit which would make it easier for people to build a secure future. Read PDF of release.

Nearly one in five West Virginians struggled to afford basic necessities in 2014, living on less than $24,000 a year for a family of four. Almost one in four West Virginia children is growing up in a family struggling just to get by. West Virginia has seen no progress in reducing poverty since the end of the recession, and the number of people living in poverty remains too high, holding back our economy and hampering our children’s futures.

Enacting a pro-work state earned income tax credit would open the doors of opportunity for people at low-wage jobs by letting them keep more of what they earn to help pay for things that allow them to keep working, such as child care and transportation. This will help build a more secure future for these families – including their kids – while boosting local economies across the state. In contrast, proposals to cut taxes for the wealthy and businesses would close the doors of opportunity, taking away resources from services families rely on every day without boosting the economy or creating jobs.

“A state earned income tax credit would help low-wage earners stay on the job, allowing them to build a more secure future, while helping to lift those struggling families out of poverty,” said Sean O’Leary, policy analyst for the West Virginia Center on Budget and Policy.

West Virginia highlights from the 2014 American Community Survey include the following: 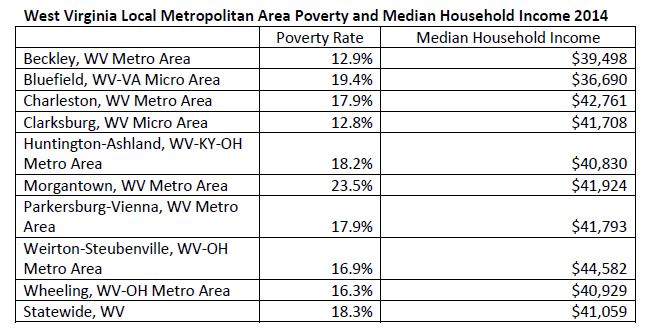