In 2012, SB 532/HB 4387 was introduced requiring all West Virginia voters to present official government-issued photo identification in order to vote. The Voter ID law was reintroduced for the 2013 legislative session (SB 13/HB 2215). Based on national data and the experiences of other states, it is estimated that the implementation costs of a Voter ID law in West Virginia could top $5 million over five years (Figure 1). Read PDF here. 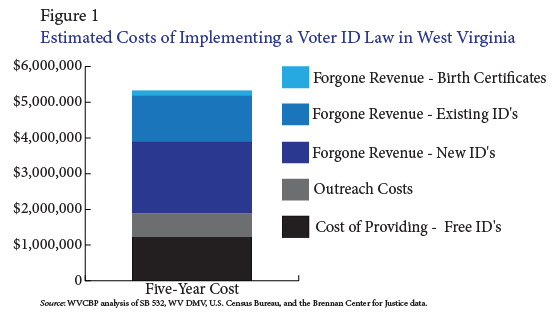 At a time when West Virginia is facing declining revenues while the needs of the state continue to grow, the costs and benefits of policies like Voter ID need to be carefully considered. And the costs of implementing a Voter ID law in West Virginia easily outweigh its nearly nonexistent benefits.

Throughout history, the right to vote has consistently been expanded – to non-property owning men, to African Americans, to women, and to young adults. West Virginia has enjoyed and benefited from history’s expansions of voting rights. In fact, it was West Virginia Senator Jennings Randolph who played a pivotal role in passing the 26th Amendment that moved the voting age from 21 to 18.

If there is a problem with voting in West Virginia, it is that not enough people exercise their right. West Virginia has ranked second to last for voter participation during the last two presidential elections, with less than half of the eligible voting-age population casting a ballot.

But instead of working to encourage more voter participation, lawmakers in West Virginia and in other states are going in the opposite direction, proposing new restrictions that could make it more difficult to vote. Last year, legislators introduced SB 532/ HB 4387, which would require voters to present a photo ID (identification description) in order to vote, and are likely to reintroduce the bills this year.

Currently, 11 states have photo voter identification laws in effect, with another five states with photo ID laws not yet in effect, and another 17 which require a non-photo ID in order to vote. 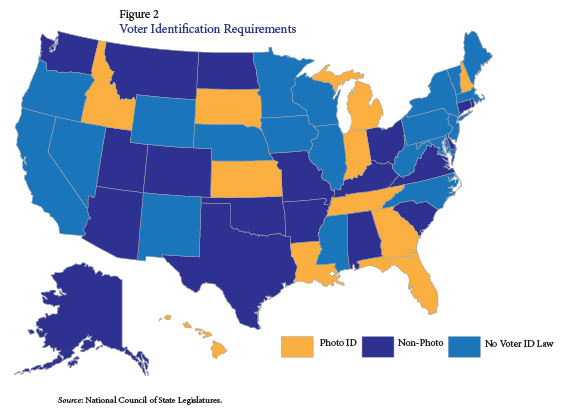 While states adopt Voter ID laws in order to prevent voter fraud, the type of voter fraud prevented by Voter ID laws is virtually nonexistent. Voter ID laws only prevent voter impersonation; they do not stop other types of election fraud like purging of voter rolls, absentee ballot fraud, and ballot tampering. There have been only 10 reported cases of voter impersonation nationwide since 2000, and none in West Virginia. West Virginia has had 16 cases of election fraud since 2000, but all were committed by campaign or election officials, and none of them would have been prevented by a Voter ID law. Instead of preventing voter fraud, voter ID laws simply make it more difficult to vote.

Nationwide, an estimated 11 percent of adults lack a government-issued photo ID. This is equal to 160,422 adults in West Virginia.

The courts have made it clear that states must act aggressively to ensure that no voter is disenfranchised, and several states have seen their voter ID laws overturned or held up. These requirements create significant costs to any state trying to implement a voter ID law.

The cost of implementing a voter ID requirement was estimated based on the requirements imposed by the courts on other states, the experiences of other states, and the state’s fiscal analysis of SB 532. The cost was estimated over five years in order to cover national and state elections, so most voters would have participated in an election and become aware of the new requirements, and would also cover one full cycle of state ID renewals.

Providing free ID’s would impose two costs on the state. First would be the cost of producing the new ID’s for those who need them to vote. According to the state Division of Motor Vehicles, the cost to produce a photo ID is $7.60, which includes both material and personnel costs. Therefore, the cost to provide a photo ID to all eligible adults who lack one would be $1,219,204.

Second, providing new ID’s at no cost would result in the loss of state revenue. Currently individuals can purchase a non-operator ID from the state Division of Motor Vehicles, which must be renewed every five years at a cost of $12.50.

Case law has established that states may not discriminate in their provision of ID’s, so West Virginia would not only have to forgo the revenue from the newly issued ID’s, it would also have to forgo the revenue collected from those who currently have a non-operator ID. According to the state Division of Motor Vehicles, there are 103,320 adults who currently buy a non-operator ID. Over the five-year renewal cycle, the state would lose $2,005,275 in revenue from the 160,422 new ID’s issued, and $1,291,500 in revenue from the existing 103,320 ID’s for a total of $3,296,775 in lost revenue.

The cost of updating the free ID’s would be recurring. As names and addresses change, new ID’s would have to be issued, as well as ID’s for those turning 18 each year. This additional cost was not able to be estimated.

The Voter ID law proposed last year in West Virginia did not include any voter outreach plan or program to educate voters about the changing requirements, which is required to avoid legal challenges. Georgia’s Voter ID law was repeatedly struck down due to insufficient public education. Outreach programs sufficient to avoid legal challenge include:

The courts have put strict requirements on states, ordering that obtaining voter ID’s must be easily accessible in addition to being free. A federal court struck down Georgia’s Voter ID law because the state did not have a driver’s service center in every county, the offices did not have enough open hours, and offices were located in areas without available public transportation.

As a result, many states have created multiple mobile DMV offices to reach rural and confined populations. While this report does not estimate the cost for West Virginia to create one, the ease of access to DMV offices is something the state would have to consider before enacting a Voter ID law.

Table 1 compiles the various costs that the state would incur in order to properly implement a Voter ID law. Providing free ID’s to all voting age adults who lack one, as well as sufficient outreach, would cost the state $5.3 million in direct costs and forgone revenue over five years. Additional expenses not tallied include the ongoing costs of providing new ID’s to those turning 18, as well as the costs on ensuring ease of access to the free ID’s.

Table 1 also estimates the cost of providing a free ID to half of those who currently lack an ID, since the turnout in the last two presidential elections was roughly 50 percent of the voting-age population. The direct costs and forgone revenue for providing half of those eligible is equal to $3.6 million.

First, the fiscal note estimates that there are 1,284,158 issued driver’s licenses and that there are 1,217,515 registered voters in the state. Therefore, the DMV would need to provide 66,643 free ID’s, the difference between the two figures. However, even assuming that the two numbers are measured from the same population, the 66,643 figure would represent individuals who have driver’s licenses but are not registered to vote, rather than individuals who are registered to vote, but do not have a driver’s license. In any case, the logic behind the cost estimate is flawed. The estimate for the lost revenue is similarly flawed.

Since the bill does not address the potential outreach costs, forgone revenue from providing birth certificates, and the potential costs of expanding DMV office access, these costs are not included in the fiscal note.

Requiring voter ID places a heavy burden on the state’s resources, election officials, and citizens to ensure that no voter is disenfranchised. With already low voter turnout, as well as already strained state resources, West Virginia should carefully consider the costs of a Voter ID law. Before diverting resources away from current needs to implement one, while potentially discouraging voters and lowering turnout, we should ask if a Voter ID law is just an expensive solution looking for a problem.

Brennan Center for Justice at NYU School of Law, “Citizens Without Proof: A Survey of Americans’ Possession of Documentary Proof of Citizenship and Photo Identification” (November 2006), retrieved from http://www.brennancenter.org/sites/default/files/legacy/d/download_file_39242.pdf

Brennan Center for Justice at NYU School of Law.

Jody Harris and Christina Reinhard, “Maine Voter ID: At What Price? The Cost to Implement a Voter ID Law in Maine,” (Maine Center for Economic Policy, November 2012), retrieved from http://www.mecep.org/av.asp?na=443