Health care is a funny thing.  Everyone needs it, yet lots of people can’t afford it, and hospitals have to treat them regardless.  Treatment prices vary wildly depending not only on where you live but where you go and whether or not you have insurance.  Oddly, those without insurance are almost always charged more for the exact same treatment than their insured counterparts.  Meanwhile, physicians earn handsome sums of money to treat someone after they’ve gotten sick or injured but are paid peanuts to keep that person from getting sick in the first place — quite a perverse incentive there, right?

As it turns out, West Virginia sits right in the heart of what could be called the Prescription Belt.  Or maybe it should be the “overPrescription belt.”  Coming on the heels of the recent study finding that West Virginia leads the country in the rate of overdose drug deaths, it’s time to acknowledge we have a very serious issue in our state. 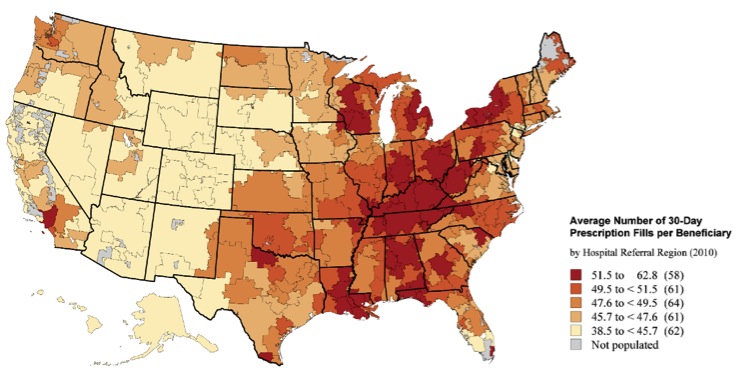 The study by the Dartmouth Institute for Health Policy and Clinical Practice examined prescription trends of Medicare Part D recipients around the country.  In other words, these are Medicare patients over 65 years old who have prescription drug coverage.  The map above shows the average number of prescriptions filled in a one-year period per beneficiary by region of the U.S.  You can see that the average beneficiary in the dark-red areas receives between 52 and 63 thirty-day prescriptions in a year, while those beneficiaries in the light beige receive about 39 to 46 prescriptions per year.  As you can see, West Virginia sits almost entirely within the dark red, as does much of Appalachia.

Your first thought, like mine was, is probably that this is largely explained by health status.  We know that West Virginia has higher rates of obesity, diabetes, cardiovascular disease (the list goes on) than most of the country so it makes sense that our elderly population requires more treatment.  The researchers thought to look at that as well and found that health status only accounts for about 30 percent of the variation in prescription rates, leaving 70 percent medically unexplained.

The researchers found that there was little variation across regions in the treatment of specific conditions like a heart attack where certain medications would be the standard of care. However they did find distinct differences in prescription patterns of “discretionary” and “high-risk” medications.  This includes prescriptions like proton pump inhibitors (like Prilosec) and anti-depressants (like Prozac or Zoloft, shown in the figure below) that may have serious side effects or be ineffective or potentially harmful for certain patients.  On the whole, West Virginia saw much higher than average prescription rates for these types of medications than other areas of the country. 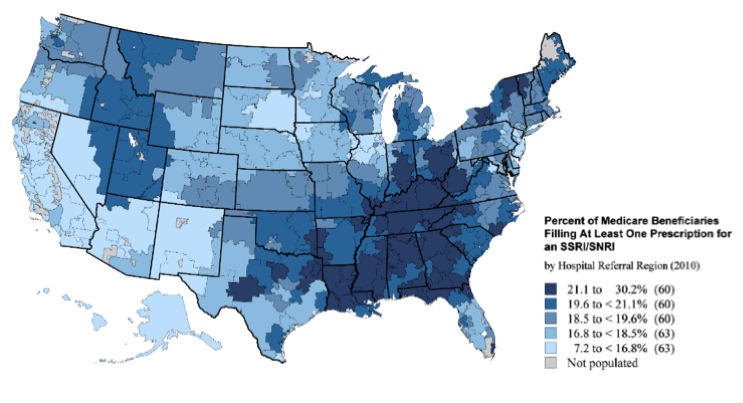 Above Figure: Percent of Beneficiaries Receiving an Antidepressant Prescription (SSRI/SNRI)

While this study is looking at a very narrow population, seniors with Medicare Part D, there is no reason to think that this over-prescription pattern doesn’t hold up across all ages in West Virginia.  We already know that the Mountain State leads the U.S. in prescription drug deaths, and now we have quantifiable evidence that physicians here are prescribing significantly more medicines than physicians in other parts of the country.

But why? And what do we do about it?