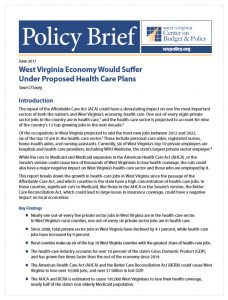 This West Virginia Center on Budget and Policy report, West Virginia Economy Would Suffer Under Proposed Health Care Plans, breaks down the economic gains the state has experienced since the passage of the Affordable Care Act and the devastating impacts its repeal could have in West Virginia, specifically in rural areas with higher concentrations of health-care jobs.