After Years of Cuts, West Virginia Can Clear the I/DD Waiver Waitlist and Invest in Home Health Workforce

Medicaid’s Home and Community-Based Services (HCBS) provisions help ensure that Medicaid beneficiaries including people with intellectual or developmental disabilities, physical disabilities, or mental illnesses, are able to receive services in home-based or community settings rather than in an institutional setting. These critical provisions of Medicaid help beneficiaries fully participate and live in their communities and ensure the state’s compliance with the Olmstead Supreme Court decision, a landmark civil rights case which found that unjustified institutionalization of people with disabilities is a form of segregation and illegal discrimination.

The I/DD waiver program is one of West Virginia’s HCBS initiatives, paying for home- and community-based services to instruct, train, support, and assist West Virginians with intellectual and developmental disabilities. According to the WV Bureau for Medical Services, the state’s I/DD waiver “assist(s) individuals who have intellectual disabilities and/or developmental disabilities in achieving the highest level of independence and self-sufficiency possible in their lives”.

As of November 2019 the I/DD waiver program is providing home- and community-based services for 4,816 West Virginians and an additional 1,084 West Virginians are approved, meaning they meet eligibility guidelines, but are on a waiting list for services. States are able to impose both enrollment and per person cost caps on waiver programs, unlike traditional Medicaid services where all who meet income and eligibility guidelines are accepted.

Spending on the home- and community-based services waiver program in West Virginia has declined significantly since 2015, especially when accounting for the fact that the state has added a new population to the waiver – residents with Traumatic Brain Injuries (TBI). 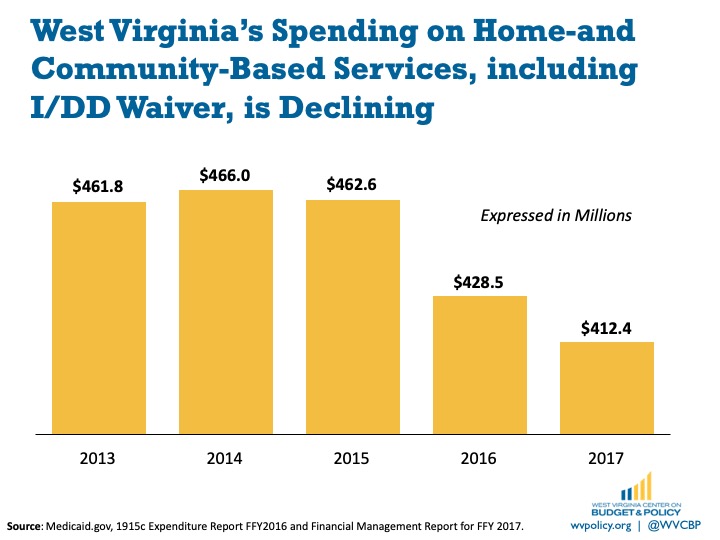 West Virginia can clear its wait list and provide home- and community-based services to all 1,084 people currently waiting for services by allocating approximately $19 million in additional state funds to the program and asking the Centers for Medicare and Medicaid Services for the necessary additional waiver slots. According to DHHR Deputy Director Jeremiah Samples, the estimated cost per waiver enrollee is $69,000 per year. The services qualify for the federal medical assistance percentage (FMAP) and the federal government would put in $2.99 for every dollar the state puts in, for an annual total of approximately $75 million to cover the additional individuals needing services ($19 million in state funds and $56 million federal funds).

Workforce Development Opportunities Can Strengthen the Program For the Coming Years

Additional reforms and improvements around workforce development may also be considered to ensure that there are enough providers to serve the individuals and families who become enrolled in the waiver program if the wait list is cleared. Advocates are concerned that current HCBS Medicaid reimbursement rates will need to be increased. Home health and personal care workers generally earn low wages, which leads to high turnover, an inexperienced workforce, and worker shortages. The median hourly wage for home health aides in West Virginia is $10.06 compared with the national median wage of $11.63. West Virginia lawmakers could continue to require that any reimbursement rate increases to agencies be passed on to health workers, as they did in 2019 when they allotted an additional $1.5 million to the program. Home health and personal care workers are often not offered comprehensive benefits including health insurance, which could also go a long way toward retaining skilled workers.

An additional suggestion to help recruit and retain home health workers is to professionalize the workforce by developing career ladders so that there is a path to skill-building, advancement and better pay.

After years of reduced expenditures on home- and community-based services, West Virginia lawmakers can use part of the state’s Medicaid surplus to provide services to all of the eligible residents who are currently waitlisted. The state should also consider workforce development improvements to make sure the program remains healthy and accessible for years to come.