Just a month into peak flu season, the CDC has already declared a national epidemic due to the flu’s widespread activity and the deadly nature of this year’s virus. West Virginia is no exception. The outbreak is considered widespread across our state, as you can see from the the map below. While preventing the spread of the flu means staying home from work, a large chunk of workers do not have access to a single paid sick day. 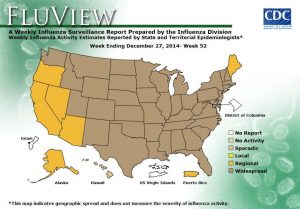 As flu activity is increasing, providers are seeing more flu hospitalizations and flu deaths. Part of the reason the flu is so widespread this year is because most of the flu strains circulating are different from those included in the flu vaccine. In order to combat the outbreak the CDC is strongly advising people to stay at home when sick. Health providers in the state have offered to write doctors’ notes for patients who are diagnosed with the flu or flu-like illness so they can begin to use their available sick time. The problem with this recommendation is that over 225,000 West Virginia workers do not have access to a single paid sick day. A doctor’s note does not help low-wage workers who cannot risk losing a paycheck or their job when they are ill. 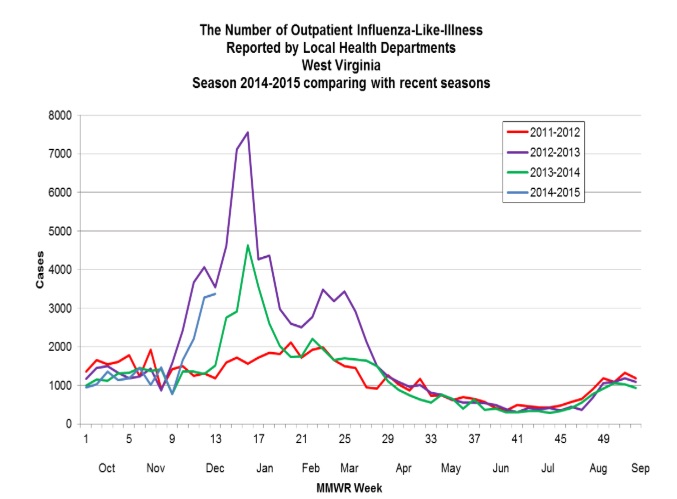 Almost half of workers who do not receive paid sick time have reported going to work when they are ill, according to a study published in the journal Vaccine. Outbreaks spread further and last longer in workplaces that are less likely to have sick days, according a study of the 2009 H1N1 flu pandemic by the Institute for Women’s Policy and Research. With around two-thirds of service workers in West Virginia lacking access to sick time, the risk doesn’t stop at the workplace. These workers perform services, such as preparing food, and the general public’s health is at risk when a worker cannot afford to stay home ill.

The WV Department of Education has joined with WV DHHR to create a pledge for students to fill out when they return to school this week, promising to help prevent the spread of flu by washing their hands and covering their mouths when they cough. I am sure many health officials wish that students could easily pledge to stay home from school to avoid spreading the flu. Unfortunately, when low-income parents do not have access to paid sick days, staying home to care for a sick child is not an option. This is because three-and-a-half days of missed work is the equivalent of an entire monthly grocery budget for a low-income family, according to the Economic Policy Institute. According to the CDC, adults are contagious for 5-7 days after they become sick with the flu and children may be considered contagious for even longer periods.

Establishing a minimum standard for paid sick time will not only help protect workers and help families be healthier and productive, but it could help mitigate the risk of contracting and spreading deadly viruses like the flu at our workplaces and schools.