Wage Theft in West Virginia: Solutions for a Hidden Epidemic 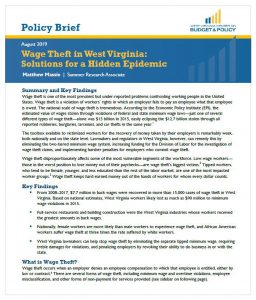 Wage theft is one of the most prevalent but under-reported problems confronting working people in the United States. Wage theft is a violation of workers’ rights in which an employer fails to pay an employee what that employee is owed. The national scale of wage theft is tremendous. According to the Economic Policy Institute (EPI), the estimated value of wages stolen through violations of federal and state minimum wage laws—just one of several different types of wage theft—alone was $15 billion in 2015, easily eclipsing the $12.7 billion stolen through all reported robberies, burglaries, larcenies, and car thefts in the same year. Read full report.

The toolbox available to victimized workers for the recovery of money taken by their employers is remarkably weak, both nationally and on the state level. Lawmakers and regulators in West Virginia, however, can remedy this by eliminating the two-tiered minimum wage system, increasing funding for the Division of Labor for the investigation of wage theft claims, and implementing harsher penalties for employers who commit wage theft.

Wage theft disproportionately affects some of the most vulnerable segments of the workforce. Low-wage workers—those in the worst position to lose money out of their paychecks—are wage theft’s biggest victims. Tipped workers, who tend to be female, younger, and less educated than the rest of the labor market, are one of the most impacted worker groups. Wage theft keeps hard-earned money out of the hands of workers for whom every dollar counts.