To Create Jobs, Invest At Home

A  new report from the Center on Budget and Policy Priorities analyzes data about which businesses actually create jobs and where they create them. The conclusions from the analysis contain useful information for states, like West Virginia, looking to create jobs and grow their economy.

While West Virginia recently underwent a significant tax reform, and is looking to do the same again, this failed to significantly create any new jobs in the state. But, as this new report shows, that shouldn’t have been surprising. While tax cuts and other tax incentives like those enacted in West Virginia are used to lure businesses from other states, the report finds that the vast majority of jobs are created by businesses that start up or are already present in a state. From 1995 to 2013, about 87 percent of private-sector job creation in a typical state was “home grown,” coming from startups, the expansion of employment at existing establishments, and the creation of new in-state locations by businesses already headquartered in the state. In contrast, jobs that move into one state from another typically represent only 1 to 4 percent of total job creation each year. 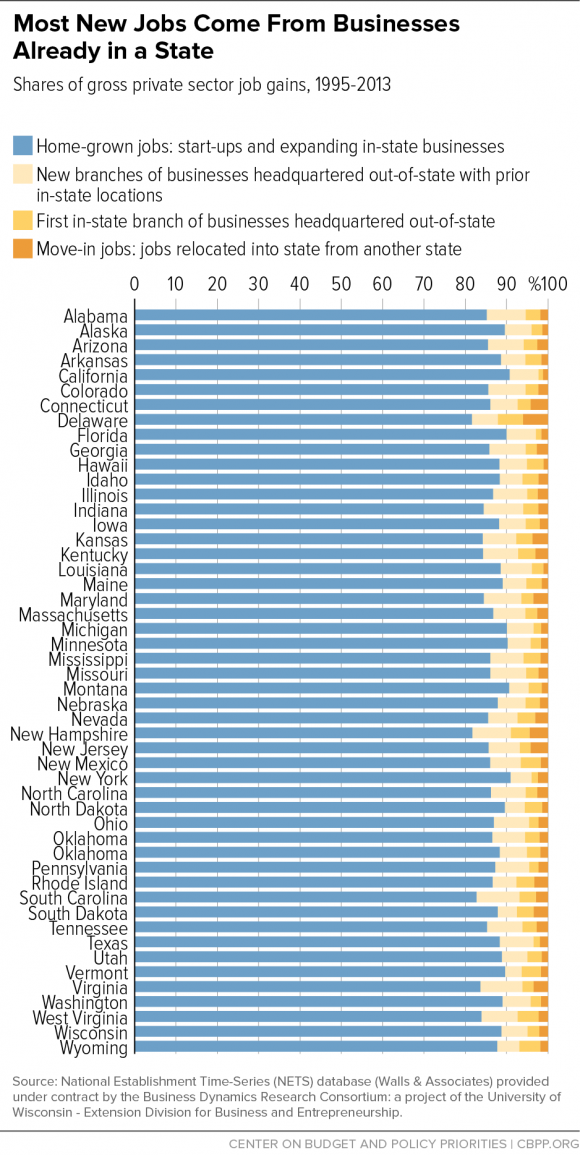 The report also found that start-ups and young companies are responsible for most of the job creation when the economy is healthy. This means that economic development strategies that focus on tax cuts and tax incentives are likely to fail. Tax cuts are poorly suited to helping startups and other rapidly growing firms, in part because these businesses often have little income in their early years, after spending heavily on new equipment, product development, and marketing.

All of this suggests that West Virginia should look beyond doubling down on the failed tax cuts of the past as an economic development strategy, and instead invest in schools and colleges, improving workers’ skills, and maintaining communities that are attractive to residents who want to start a business. Successful entrepreneurs report these factors were key to where they founded their companies. More tax cuts and subsidies will only waste state resources that would be better utilized building a skilled workforce and improving the quality of life for local residents, investments that support real economic progress.