Blog Posts > The When and the Where of the Recession
September 3, 2011

The When and the Where of the Recession

While economists point to December 2007 as the official beginning of the national recession, and to June 2009 as the official end, that doesn’t mean that each state was impacted by the recession only during that stretch of time. In fact, when it comes to jobs, when each state began to feel the affects of the recession and how long the pain lasted varies greatly state to state.

The following chart demonstrates this. Each horizontal line on the chart represents the amount of time between each state’s peak employment and when employment finally bottomed out between January 2007 and July 2011. For example, for the U.S. as a whole, employment peaked at 137,996,000 in January 2008, and bottomed out at 129,246,000 in February of 2010, with the decline from top to bottom lasting 25 months. 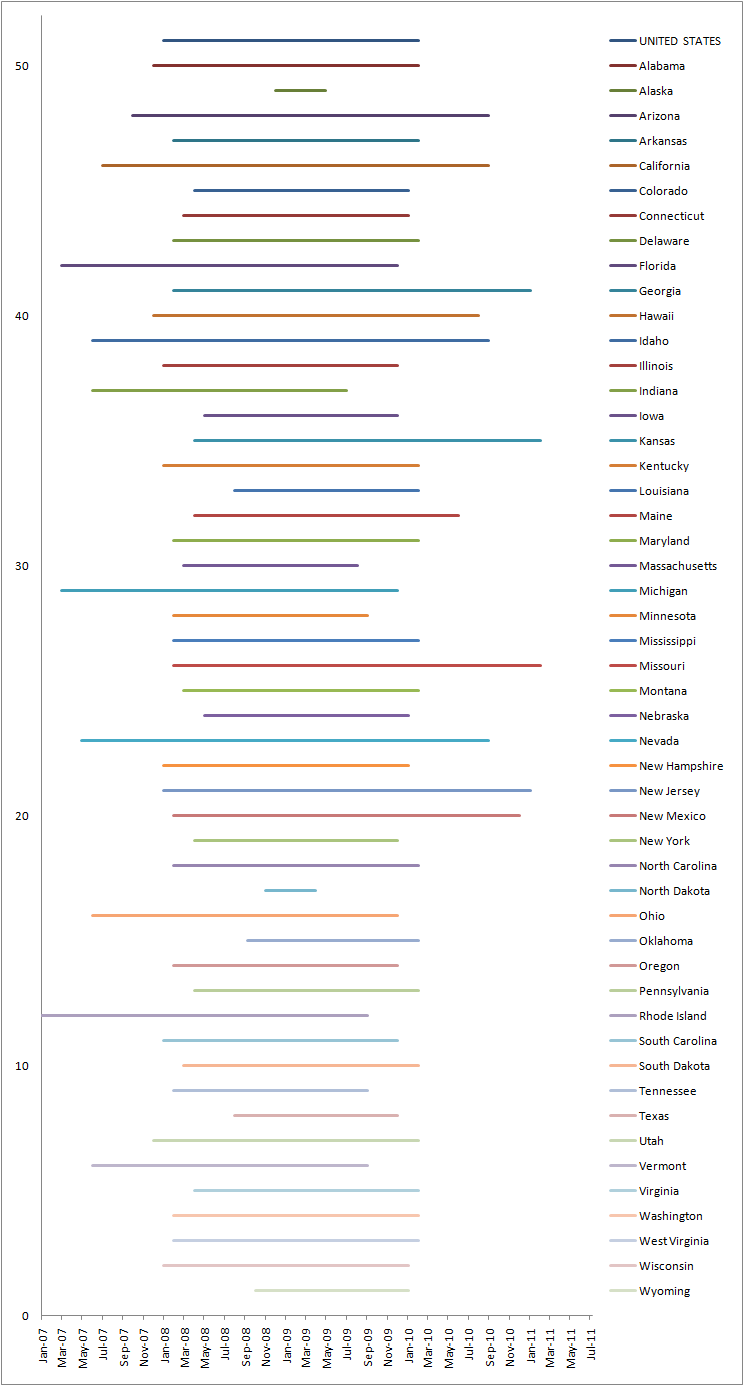 Again, the chart shows that not only was there a great deal of variation of when each state started to lose jobs, but also in how long the job loss lasted.
Rhode Island was the early bird when it came to job losses, with employment peaking in January 2007, nearly a full year before the national recession began. At the other extreme, Alaska didn’t see employment peak until December of 2008, nearly a year after the recession began.
Together, Alaska and North Dakota had the shortest downturns, both at 5 months before reaching bottom. They both also had the smallest drop in employment during their downturn, with employment falling less than 2 percent during their downturns, compared to the national average of a 6.5 percent decline during the slide.
Nevada had the longest downturn, with employment peaking in May of 2007 and not hitting bottom until September of 2010, a length of 40 months. Nevada also had the largest reduction in employment during its slide, as employment fell 14.6 percent.
Both Kansas and Missouri were the latest states to pull out of their slides, reaching their employment bottoms in February of 2011, although Missouri’s downturn lasted 23 months while Kansas’s lasted 34.
Finally, West Virginia presents an interesting case. It took us 24 months to get from peak to trough, just under the national average of 25 months. But during that time, our employment declined by only 3.4 percent, compared to the national average of 6.5 percent. So when it comes to jobs, the length of the recession was about average in West Virginia, but its strength could have been much worse.