The State of West Virginia’s Immigrants 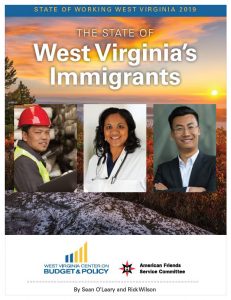 West Virginia’s immigrants come from all over the world and while a small share of the populations, they are broadly represented throughout the state’s workforce and economy. Read PDF of report.

But a fuller conversation about immigrants tends to be overshadowed by the controversy in the U.S. around immigration reform. This conversation all too often tends to paint immigrants as a homogenous group. The conversation ought to reflect an informed understanding of this dynamic population, its diverse contributions to the economy and the challenges immigrants face.

This report attempts to have that deeper conversation, reflecting on the history of immigrants in West Virginia, the challenges they have faced, how they’ve become enmeshed in the fabric of the state, and their role in the state today.