Blog Posts > The State of Older Adults in West Virginia: Economic Security and the Over 65 Population
July 25, 2012
WVCBP

The State of Older Adults in West Virginia: Economic Security and the Over 65 Population 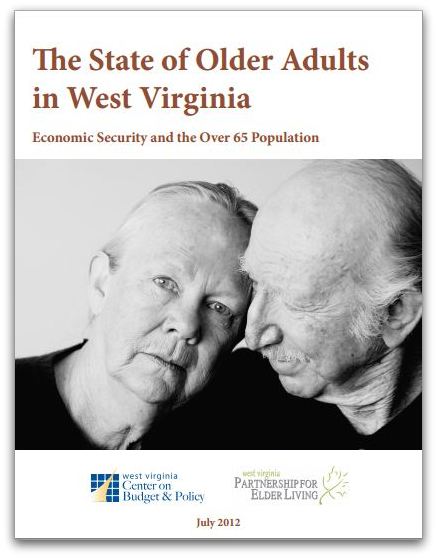 With seniors expected to make up nearly a quarter of West Virginia’s population by 2035, policymakers need to plan today to ensure seniors have a secure retirement, according to a new report by the West Virginia Center on Budget and Policy and the West Virginia Partnership for Elder Living. The report examines the current economic security of the state’s senior population and suggests what can be done to improve their lives now and in the future. Read

West Virginia has the second largest senior population (age 65 and older) in the country, which will continue to grow as baby boomers retire. Today, seniors comprise approximately 16 percent of the state population. By 2035, nearly one in four state residents will be over the age of 65. This demographic shift will have an enormous impact on the state’s economy in the coming decades. Policymakers and other stakeholders will need to consider policies and programs to ensure that the state’s seniors age gracefully.

This report examines the composition of West Virginia’s growing elder population by looking at demographic features, such as age, race, and sex, and also explores how elders make ends meet and what programs currently support them as they age in place. The appendix of the report contains countylevel data profiles of elders to shed light on how seniors fare in each of the state’s 55 counties. Policy recommendations are presented to help West Virginia build a stronger, more economically secure
existence for its seniors, both today and tomorrow.

• Elders are expected to increase from 16 percent of the state’s population to nearly one-fourth of the population by 2035, while the number of children and workers supporting seniors will decline by more than nine percent. This demographic change could make it more difficult to fund important programs for seniors.

• Women make up a larger share of the state’s senior population than men and are at higher risk of economic insecurity due to lower lifetime retirement assets.

• Approximately 45 percent of West Virginia elders have a disability, compared to 37 percent nationally. Seniors with a disability are more likely to be poor and economically insecure.

• Health care and housing make up the largest expenses for West Virginia seniors, especially for those that have a mortgage or rent.

• One in three elder West Virginians is in fair or poor health, which translates into higher health care costs.

• While 80 percent of all elderly households in West Virginia own a house, African Americans in the state have lower home ownership rates — 69 percent compared to 84 percent for whites.

• For approximately one in three seniors, Social Security is the sole source of income. Low- and moderate-income seniors rely almost entirely on Social Security for income, receiving only nine to 18 percent of their income from other sources.

• While nearly 30 percent of West Virginia elders rely on Medicaid for health and long-term care costs, very few seniors take advantage of other supports like food stamps or utility assistance.