There has been plenty of attention lately about unfair property tax assessments for homeowners, where even without a rate increase, a homeowner’s property tax bill jumps due to an increase in the assess value of the home. However, there is another issue with property taxes that has been going unnoticed.

Since 1994, when the first statewide reappraisal was completed, the property tax base has been slowly shifting away from business property and towards homeowners. From 1994 to 2010, the total assessed value of Class II properties (owner-occupied residencies) increased by 163%, while the total assessed value of Class III and IV properties (predominately business property, both real and personal) grew much slower, increasing only 103%.
The result of this disparity in assessments has been a shift of the tax burden onto homeowners. In 1994, Class II properties made up about 31% of the property tax base, in 2010, their share had grown to nearly 40% (Figure 1). 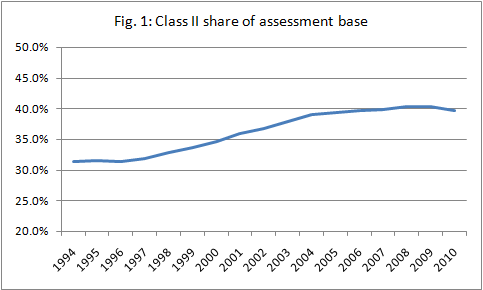 And since effective tax rates have been relatively flat for all property in WV, the share of total tax revenue from Class II properties increased from 19.6% to nearly 25% (Figure 2). 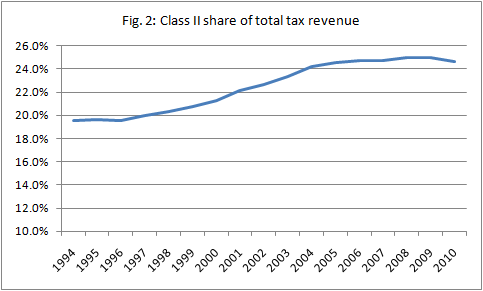 The shift of the property tax burden away from businesses and on to homeowners has been brought about, in part because of the preferential valuation of business property. Legislation like Senate Bill 465 and House Bill 3099 increase the number of facilities that qualify for salvage valuation treatment, which lowers the assessed value of their property and reduces their tax burden. Previous examples of this special treatment since 1994 include Coal Waste,Disposal Power Projects, Wind Power Projects, tools/dies/jigs/molds used in manufacturing, Qualified Capital Additions to Manufacturing Facilities, Special Aircraft Properties, and certain High-Technology Properties.

Rather than encouraging economic development that allows the tax reductions to pay for themselves, the property tax burden has instead shifted to homeowners, through higher assessments for Class II property.

Proposals to eliminate the tax on personal property (which would primarily benefit large manufacturers) will likely have the same effect.
Eroding away at the tax base is a poor model for economic development, particularly when the attacks are focused on property taxes. In West Virginia, over 75% of property tax collected funds local schools. Attracting businesses and economic growth requires more than cutting taxes. Communities need a quality education system, an educated workforce, and an infrastructure that is capable of supporting businesses. Giving away our tax base to attract businesses only increases the burden on the people of West Virginia and makes it nearly impossible to make the investments necessary for real, sustained economic prosperity.