The Minimum Wage and Big Business

West Virginia’s proposal to increase the state’s minimum wage to $8.75 continues to work its way through the legislative process. We’ve looked before at the workers who would benefit from the increase, and we’ve also looked at how much it would cost the affected businesses. But now, let’s take a closer look at businesses where are these low-paying jobs found.

In West Virginia, a little over 10 percent of all jobs pay less than $8.75 per hour. However, these jobs are concentrated in a small number of industries. Nearly 90% of the low-wage jobs ($8.75 per hour or lower) are found in four industries: retail trade, education and health services, food services, and administrative services. 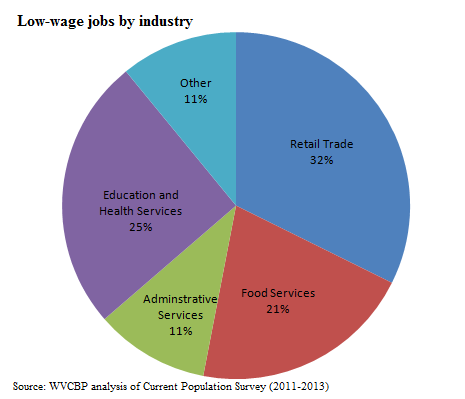 What’s more, the low-wage jobs are for the most part, concentrated in industries where low-wage workers make up a substantial share of the industry’s workforce. For example, over 43% of the jobs in the food services industry pay below $8.75 per hour. 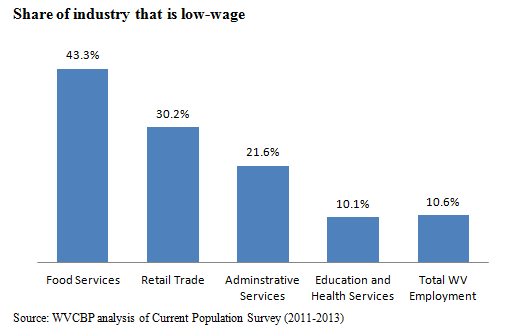 And while most low-wage jobs in West Virginia are concentrated in a few industries, those workers are largely employed by big businesses, rather than small businesses. Nearly three-fourths (73%) of all workers earning less than $8.75 per hour are employed by firms with at least 100 employees. 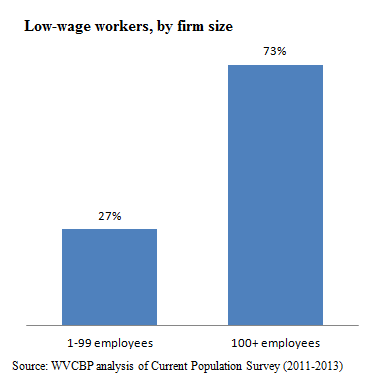 So if West Virginia does raise its minimum wage to $8.75 per hour, the majority of the impact will be felt by large corporations, not small locally owned businesses.

And the businesses that are employing these low-wage workers aren’t teetering on the edge of collapse. Most are in a fairly strong position. For instance,  of the four industries where almost all of West Virginia’s low-wage workers are found, each one has had stronger employment growth over the past year than the state as a whole. 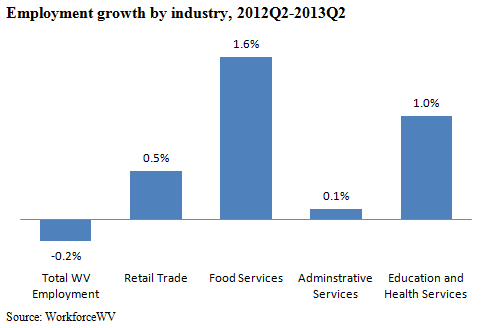 Simply put, the evidence is just not there to support the claim that employers can’t afford to pay a higher minimum wage. Not only is the actual cost of the increase less than what some would lead you to believe, but the vast majority of low-wage workers in West Virginia are employed by large corporations. Theses businesses that employ low wage-workers are in strong financial positions, with record-setting profits, and whose executives and shareholders are keeping an ever growing share of the pie and can readily afford to pay a higher minimum wage.