The Middle Class has Missed Out

Last year, I did a couple of posts about rising income inequality and the struggles of the middle class. Today, I want to look at a similar topic, how much of the past few decade’s economic growth has been felt by the middle class. 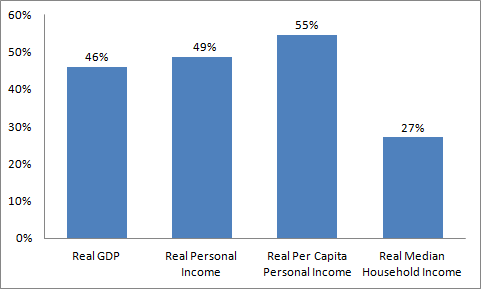 Source: U.S. Bureau of Economic Analysis and Census Bureau
West Virginia’s GDP (after adjusting for inflation) grew 46% from 1984 to 2010. Personal income grew right along with the economy, increasing by 49%. As the economy grew, the state’s population declined, allowing per capita personal income to grow at a higher rate, 55%.
However, median household income grew at nearly half the rate as the rest of the economic indicators. How was it that per capita personal income grew at such a higher rate than median household income? The gains associated with the economic growth of the past decades were not shared. When the average (or per capita) grows faster than the median, that means the growth has been concentrated at the top.
One clear sign of this disparate growth is in wages. The real median wage in West Virginia grew 16% from 1984 to 2010, while wages for the top 10% of wage earners grew by 26%.
The picture at the national level is even more stark.
US Growth 1984-2010 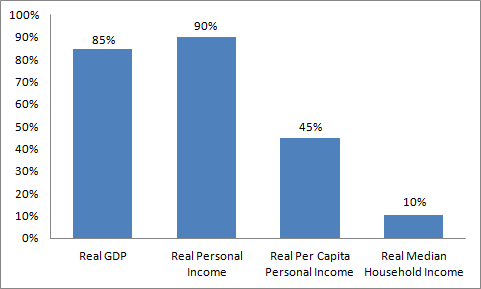 Source: U.S. Bureau of Economic Analysis and Census Bureau
The national economy has grown by 85% since 1984, and personal incomes have grown 90%. However, a good deal of that growth was simply due to population growth, as per capital personal income only grew by 45%. Most distressing is the lack of growth in median household incomes, which only grew by 10%. So while the nation’s total income nearly doubled, the middle class saw almost nothing.
Again, wages play an important role in the disparity. The national median wage grew by 11% from 1984 to 2010, while wages for the top 10% grew by 28%.
Our economy didn’t always look like this. For decades, as the economy grew, prosperity was widely shared. But for over 30 years now that has no longer been the case, and the rising tide has not lifted all boats. As we struggle to come out of this recession and restart the economy, we would be wise to take steps to make sure the growth and prosperity are shared. An economy that expands but in doing so leaves behind the vast majority of those working in it may be a growing economy, but it is not a healthy economy.