Blog Posts > The Impact of the Decline of Coal and the Rise of Natural Gas on Local Severance Tax Revenue
December 11, 2012

There are five separate funds with different methods for distributing severance tax revenue to local governments in West Virginia.

Projections of future coal and natural gas production suggest changes to the make-up of the local dedication of severance tax revenue. While coal production is projected to fall, rising coal prices should keep revenue stable. The County Coal Revenue Fund is projected to fall from $24.8 million in 2010 to $20.6 million in 2020, before rebounding to $28.7 million in 2035. While the County Coal Revenue Fund is projected to stay flat, West Virginia’s coal-producing counties will see significant increases in severance tax revenue through the Coal County Reallocated Fund, which will send approximately $4.3 million in revenue to coal- producing counties in FY 2013, and will reach $20 million annually by 2027 (Figure 1). 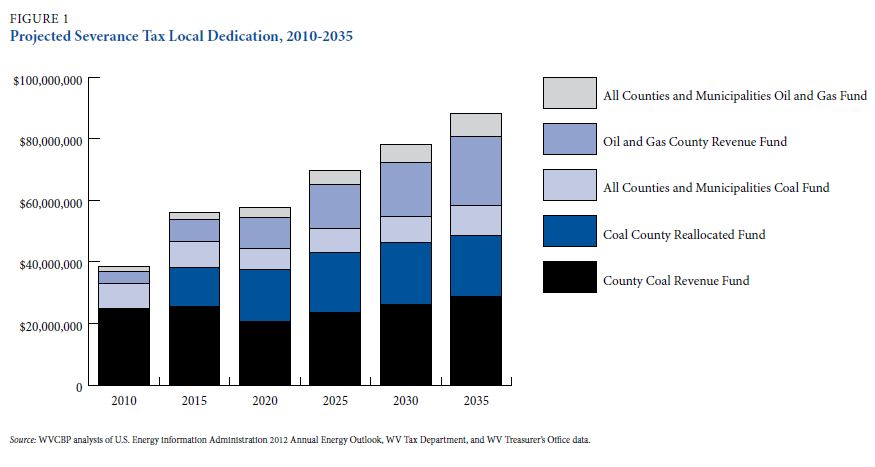 The amount of coal severance tax revenue that is split by all local governments is also projected to remain relatively flat, falling from $8.3 million in 2010 to $6.8 million in 2020, before rising back to $9.6 million by 2035 (Figure 1).

Overall the amount of severance tax revenue distributed to local governments in West Virginia is projected to increase from $38.3 million to $88.1 million from 2010 to 2035, with the growth coming from increased natural gas revenue and the new local dedication for coal-producing counties (Figure 1).

As with any projections, these estimates of severance tax revenues are subject to a degree of uncertainty, and could, in fact, be too optimistic. If coal revenues fall more sharply than expected or if natural gas revenues do not grow as much as projected, the state could consider scaling back or eliminating a number of tax expenditures that currently reduce severance tax revenue.

These tax expenditures include the reduced rate for thin seam coal, which costs the state $75 million per year in forgone revenue, as well as several tax credits against the severance tax, including the Manufacturing Investment Tax Credit, the Coal Loading Facility Tax Credit, and the Annual Severance Tax Credit, which reduce severance tax collections by several million dollars each year.