The specter of job killing property taxes in West Virginia reared its head again this week, with the cry for tax reform coming this time from outgoing Bayer CEO Greg Babe, as he presented to Charleston Area Alliance’s 2012 Annual Celebration, reported by the Daily Mail.

The Daily Mail rehashed Mr. Babe’s argument, debunked once before here, in an editorial this morning. Once again zero evidence was offered for the contention that West Virginia’s business personal property tax is a significant deterrent to investment and economic development in the state, particularly for manufacturing.
This time, the Daily Mail also insinuated that Shell’s decision to locate a cracker facility in Pennsylvania was due to the business personal property tax. It took an impressive leap of logic to come to that conclusion, as quoting from the editorial, “Although site criteria, not tax structure, was apparently the deciding factor, the fact remains: Neither Pennsylvania nor Ohio tax these business assets as West Virginia does.“
While editorial admits that taxes weren’t an issue in one breath, it goes ahead and makes it an issue anyway in the next, lack of evidence notwithstanding. And as we all know, the evidence says that if taxes were a major factor, then the no-brainer site location choice would have been in Ohio, just a hop over the border from the actual location in Pennsylvania. 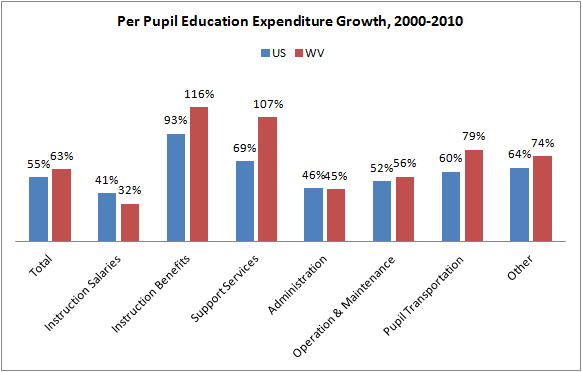 A common refrain from tax reformists is to “broaden the base and lower the rates.” And if that is the case, then it is Ohio and Pennsylvania who need property tax reform, not West Virginia. But the Daily Mail is advocating we narrow our base, and raise our rates, so we’ll be more like Ohio and Pennsylvania. That is not tax reform, that is a corporate tax giveaway, and a continuation of the shift away from businesses and onto homeowners.
Of course, that whole argument is a moot point when you consider there is no obvious relationship between tax climate and employment growth nor is there any relationship between industry specific tax rates and employment growth, (here’s two more for good measure.) But that lack of evidence didn’t stop the Daily Mail from contending, “State officials must ask themselves if business taxes are worth the loss of industry and jobs that they seem to cause.” They don’t know that business taxes cause job losses, but it feels like they do.
Finally, Mr. Babe suggests that West Virginia’s property tax system is unfair to businesses, because the rates on business property are twice that of residential property. Ignoring the fact that this is how it has been since the state’s founding, as our recent analysis of the Gestamp tax deal shed some light on property tax burdens.
According to our analysis and state documents, with no tax incentives in place, a manufacturer like Gestamp would pay an average of 0.7% of their gross income in property taxes per year, and a total of 2.6% of their gross income in total state and local taxes each year. In comparison, a median income earner in West Virginia would pay 1.3% of their income in property taxes and 9.3% of their income in total state and local taxes.
Tax reform like that advocated by the Daily Mail  only serves to continue to shift the burden away from businesses and onto working families. And they openly admit this, when they say tax breaks will be paid for by  taxes on the wages of new employees. (Of course, that same day, the Daily Mail says that our income tax keeps people out of the state, and we should, “rid ourselves of the state income tax altogether,” You can’t have you cake and eat it, too, not to mention that a greater reliance on sales tax is a greater reliance on the poor and middle class. Which they already knew.)
If the state wants to create a shared prosperity, we need to face reality. That means investing in our workforce, education, and our quality of life. Disguising tax giveaways and shifts onto working families as tax reform undercuts our ability to do so.