As the debate over the federal budget deficit and federal debt heat up, many, including plenty in West Virginia, have argued that the policies enacted since 2009 have pushed the deficit to its current heights, and only by reigning in this out of control spending can the deficit be reduced. But, the fact remains, the economic downturn, tax cuts, and the wars in Iraq and Afghanistan explain virtually the entire deficit over the next ten years.

The deficit for FY 2009 was $1.4 trillion, the largest deficit relative to the economy since the end of WWII. In 2010 the deficit stood at $1.3 trillion, and if current policies remain in place, the annual deficit will likely hover near $1 trillion a year for the next decade.
Much of the blame for these deficits and those projected in the future is placed on the major legislation passed from 2008-2010 – the stimulus bill and other recovery measures like TARP. But those contributions to the deficit are minor compared to the impact of tax cuts and the wars in Iraq and Afghanistan have and will continue to have on the deficit.
For example, in late 2008, Fannie Mae and Freddie Mac were bailed out by the federal government, followed by the TARP program to stabilize the financial system. Together, these programs added $250 billion (including extra debt-service costs) to the deficit in 2009. Their impact on the deficit quickly fades, totaling $259 billion over the decade.
The other major piece of legislation was the stimulus (ARRA), which was a mixture of assistance to the unemployed, aid to state and local governments, tax cuts, spending on infrastructure and other measures. It added $182 billion to the deficit in 2009, and an additional $490 billion in 2010 and 2011. Like TARP, the contribution of these programs quickly fades, and over the decade, ARRA and other measures, including tax cuts for businesses and further unemployment extensions, passed in response to the recession will total $1.4 trillion, including debt-service costs.
While the effect on the deficit of major legislation passed in 2008 and 2009 is highly concentrated in 2009 and 2011 before fading, the effect on the deficit of the Bush-era tax cuts not only dwarf those costs, they do not fade away as the economy recovers. From 2001 to 2008, the annual contribution of the tax cuts to the deficit totaled $1.9 trillion. From 2000 to 20011, the extension of these tax cuts accumulated another $1 trillion. If made permanent, the tax cuts will end up contributing $4.7 trillion from 2009 to 2019, easily dwarfing the combined costs of the stimulus bill, TARP, and the bailout of Fannie Mae and Freddie Mac.
Also dwarfing the costs of legislation passed since 2009 is the costs of the wars in Iraq and Afghanistan. By 2008, the wars had accumulated $674 billion in debt, and from 2009 to 2018 an additional $1.5 trillion is expected to accumulate.
Together, the wars in Iraq and Afghanistan and the Bush-era tax cuts (if made permanent), will account for over half of the projected deficits of the next decade. The stimulus, TARP, and all other economic recovery measures combined only account for 15 percent of the projected deficits. The other 30 percent is the result of the recession on the budget outlook, which includes lost revenues and increased expenditures on unemployment, food stamps, and other safety net programs compared to the 2008 CBO projections. Even with the major effect the recession had on the federal budget, the result is still smaller than the effect of the tax cuts. 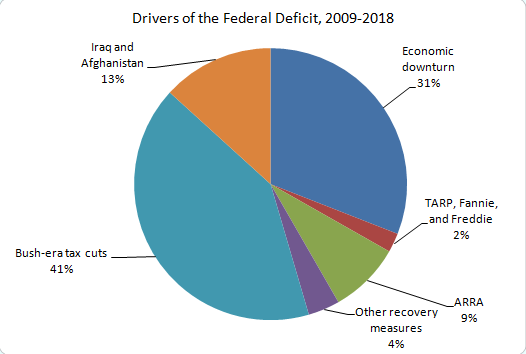 Source: Center on Budget and Policy Priorities analysis of CBO data
All of this should be kept in mind when debating the federal deficit. While the tax cuts, wars, and recession have left us with a long overhang of debt, the rise in the ratio of federal debt to GDP can be simply stopped in the near term by allowing the Bush-era tax cuts to expire in 2012. However, this alone won’t solve the longer-term fiscal challenges, which are almost entirely due to the aging population and rising health-care costs. The health reform law* contains demonstrations, pilots, and research on cost containment. The findings from these need to be used to take strong steps to slow the growth of costs in the U.S. health system, both in the public and private sector. The growth of these costs are the biggest threat to our fiscal future.
*Note – If you read the linked op-ed, Mike Stuart, the chairman of the West Virginia Republican party, claims that the health reform law increases deficits by $260 billion over the next decade. According to the CBO repealing the health reform law would increase deficits by $230 billion over the next decade. I’ll give Mr. Stuart the benefit of the doubt and assume he’s talking about CBO’s letter to Representative Paul Ryan responding to his questions about the law. To arrive at the $260 billion figure, Ryan asked the CBO to do two things. One was to include the Medicaid “doctor fix.” The fix rolls back a provision from 1997 that reduces Medicaid payment rates to physicians. For the past 8 years Congress has passed temporary fixes. Ryan asked the CBO to estimate the cost of a permanent fix, which would add $208 billion to the deficits over the next decade. But the fix was not part of the health reform law, a permanent fix was proposed on its own, with broad bipartisan support, including Representative Ryan. Next, Ryan asked about the costs of the health reform bill if several provisions were altered or eliminated, which would not present an accurate picture of the fiscal impact of the law as passed. There is also no “double counting” in the CBO’s official budget analysis of the bill. The fact remains that, according to the CBO, the health reform law will reduce the federal deficit.