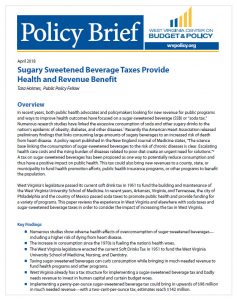 In recent years, both public health advocates and policymakers looking for new revenue for public programs and ways to improve health outcomes have focused on a sugar-sweetened beverage (SSB) or “soda tax.” Read PDF of report.

Numerous research studies have linked the excessive consumption of soda and other sugary drinks to the nation’s epidemic of obesity, diabetes, and other diseases. Recently the American Heart Association released preliminary findings that links consuming large amounts of sugary beverages to an increased risk of death from heart disease. A policy report published in the New England Journal of Medicine states, “The science base linking the consumption of sugar-sweetened beverages to the risk of chronic diseases is clear. Escalating health care costs and the rising burden of diseases related to poor diet create an urgent need for solutions.”

A tax on sugar-sweetened beverages has been proposed as one way to potentially reduce consumption and thus have a positive impact on public health. This tax could also bring new revenues to a county, state, or municipality to fund health promotion efforts, public health insurance programs, or other programs to benefit the population.

West Virginia’s legislature passed its current soft drink tax in 1951 to fund the building and maintenance of the West Virginia University School of Medicine. In recent years, Arkansas, Virginia, and Tennessee, the city of Philadelphia and the country of Mexico passed soda taxes to promote public health and provide funding for a variety of programs. This paper reviews the experience in West Virginia and elsewhere with soda taxes and sugar-sweetened beverage taxes in order to consider the impact of increasing the tax in West Virginia.