The FY 2015 federal budget proposed by President Obama, along with three proposals in Congress, strengthens the Earned Income Tax Credit (EITC) for childless workers. This, along with improvements to the Child Tax Credit (CTC) would reduce poverty among low-wage workers and their families, reduce income inequality, strengthen work incentives, and give a boost to West Virginia’s economy.

The EITC offsets federal payroll and income taxes for low- and moderate-income workers, while the CTC also helps low-income working families by offsetting part of the cost of raising a child. In 2011, 161,595 households in West Virginia received the EITC, putting $336 million in the state’s economy.

In addition to raising incomes, the EITC also has been found to encourage work. During the 1990s, employment among single mothers increased by 460,000 due to improvements to the EITC, more than what is attributed to either welfare reform or the strong economy. 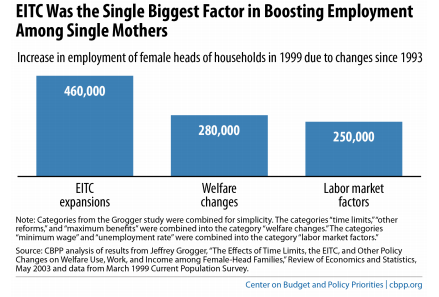 Research has also found that lifting low-income families’ income when a child is young not only can improve their immediate well-being, but with better health, more education, more hours worked, and higher earnings in adulthood. 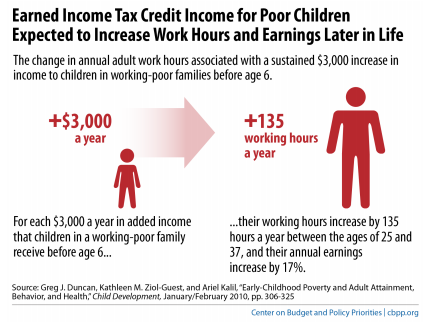 Currently, low-income working childless adults and non- custodial parents (“childless workers”) receive little or nothing from the EITC. Childless workers under age 25 are ineligible for the credit and the average credit for eligible workers between ages 25 and 64 is only about $270, or less than one-tenth the average $2,900 credit for filers with children. In addition, the childless workers’ EITC begins phasing out when earnings exceed $8,000, or just 55 percent of full-time, minimum-wage earnings. This makes childless workers the sole group that the federal tax system taxes deeper into poverty. 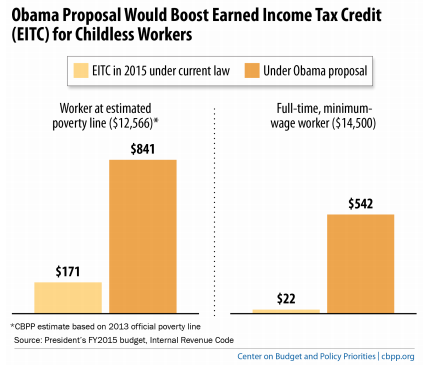 The EITC has a proven track record of boosting employment among parents. And research has shown that the EITC also has important positive long-term impacts on children. It would also gives our economy a boost, as eligible workers get to keep more of what they earn and, in turn, spend those dollars here in West Virginia.

The president’s proposal builds on this record of success by expanding credit for childless adults and non-custodial parents so that these credits can do more to increase employment and reduce poverty among these low-wage workers.