Stemming the Tide: The Racial and Economic Impacts of West Virginia’s Prison System 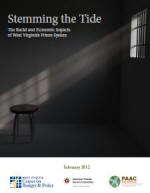 Despite little growth in either its population or crime rate, West Virginia has seen a marked increase in the number of people housed in its corrections facilities. As the state’s prisons become overcrowded, West Virginia is facing a corrections crisis that not only impacts the state’s budget but also the low-income and minority communities that are disproportionately impacted by drug addiction and substance abuse issues that land them in prison instead of treatment programs.  Read report