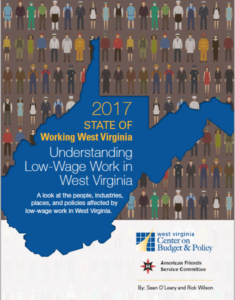 Poverty is a persistent problem in West Virginia, where tens of thousands of West Virginians live in poverty because their jobs do not pay a living wage. Read the full report.

This 10th annual State of Working West Virginia focuses on low-wage work, including demographics of those who do the work; the industries that employ them; geographic factors; the role of public programs supporting low-wage workers; and policy recommendations to improve economic well-being.

The report reveals the shifting role of low-wage work in the state’s economy, now its main source of job growth, and a path no longer confined to young workers entering the workforce. The complete picture of West Virginia’s economy shows growth in low-wage industries, while non-low wage industries decline, and wages stagnate for both.

“Low-wage work has a profound impact on West Virginia’s economy, from the capabilities of workers to provide for their families, to their health and well-being, all the way to the sate budget,” said Sean O’Leary, Interim Executive Director for the West Virginia Center on Budget and Policy. “As low-wage jobs become more prevalent in the state’s economy, we must consider public policies that support these workers and their families, recognizing their importance to the state.”