Stamping Plant to Reopen – What Does It All Mean?

The big news yesterday was that the South Charleston stamping plant has been leased by Gestamp, a Spanish automotive stamping company. According to reports, Gestamp could eventually employ 700 workers.

Gestamp chose South Charleston for several reasons, but mainly it was because the plant already contained necessary stamping equipment which allows it to be occupied immediately. The upkeep of the plant was made possible in part by a $15 million loan from the state of West Virginia in 2007. A tax break offsetting the B&O tax was also part of the incentive, as well as the state offering to buy the company’s equipment and lease it back to them, to avoid personal property taxes.

While handing out incentives and subsidies to companies in order to create jobs doesn’t always work out, it’s is worth taking a look at what is in store for West Virginia with the reopening of the stamping plant. For this we’ll take a look at some Census and Bureau of Labor Statistics data.

Motor vehicle metal stamping falls under NAICS code 31336370. According to the BLS, there were 58,600 people employed in the industry in 2011. But, like most manufacturing jobs, this number is down significantly in recent years. New employment from the reopening of the plant could signal a reverse in this trend. 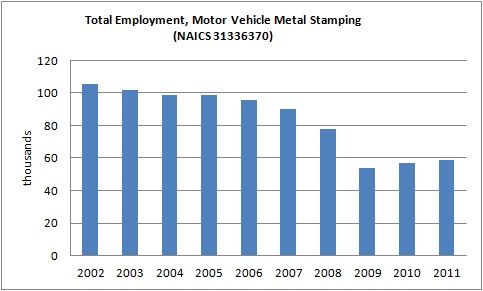 Source: Bureau of Labor Statistics
The jobs in this industry are typically good-paying jobs. According to the BLS, the average hourly earnings for the industry were $23.15, or roughly $48,000 per year for a full time employee.
According to the 2007 economic Census, there were 815 motor vehicle metal stamping establishments in the U.S. in 2007. With the employment figures from the BLS for 2007, that would mean each establishment had about 110 employees. The total value of their shipments (or sales) totaled $29.1 billion in 2007, for an average of $35 million per establishment.
The job and sales requirements of the B&O incentive call for $100 million in sales by the 4th year of production and 250 employees, making the South Charleston facility much larger than the average establishment. Reports estimate that there will be 175-200 jobs initially, and as many as 700 when the facility is fully operational.
Manufacturing jobs like these have high economic multipliers, meaning they support jobs elsewhere in the economy. According to some estimates, the jobs multiplier for manufacturing jobs is 2.91, meaning each manufacturing job indirectly supports 2.91 jobs. This means if the stamping plant does eventually employ 700 workers, up to 2,037 indirect jobs will be supported.
As for the tax incentive, it involves a credit against the local B&O tax, which the plant must meet certain sales and employment requirements to receive. The credit is for 50% or 25% of the B&O tax liability, depending on the number of years of operation. The amount of the tax that can be owed is also capped, at $365,000 per year for the life of the credit.
The table below breaks down the tax incentive. The credit would go into effect in the facility’s fifth year of production, if it has sales of $100 million and meets the employment requirements. It is impossible to know what the sales will be four years or 12 years down the road, so we are assuming that they are the minimum requirements set forth in the tax credit.

As the table shows, while the amount of the credit drops from 50% to 25% in year 10, the amount of tax owed does not increase. This is because the tax is capped at $360,000. The cap on the tax is actually more valuable than the credit over the life of the credit. Over the time frame, the credit would reduce the amount of B&O taxes owed from $14.6 million to $10.4 million, a savings of $4.2 million. However, with the cap in place, the facility would only owe $5.1 million, an additional savings of $5.3 million. This is because, beginning in year 9, the amount of tax owed is greater than the $360,000 cap. So while the credit falls from 50% to 25%, the size of the tax break actually increases, due to the cap.
Overall, over the span of the effective credit, the facility could save $9.5 million, a 65% reduction, due to the incentive. The incentive lowers the overall effective rate of the B&O tax from 0.3% to 0.1% of total sales.
So while the B&O tax break could reduce the facility’s B&O taxes by about 65%, we don’t know what the tax savings are with regard to the state owning the facility’s equipment, or the value of any other existing incentives.
For an incredibly rough estimate of the value of the facilities personal property we can do some back of the envelope calculations using the 2007 economic Census. According to the Census, in 2007 the value of depreciable assets for the motor vehicle metal stamping industry was $19.9 billion dollars, or about 68% of the value of the industry’s shipments.
If we take that percentage and apply it the the $100 million minimum sales figure, we can estimate that the personal property of the facility would have a value of about $68 million, which would be assessed at $40.8 million for property taxes (60% assessment). Class IV property in South Charleston has a tax rate of $3.03 per $100 of assessed value, which would give a property tax bill of $2,060,400. By buying and then leasing the personal property, the state would save the facility an estimated $2,060,400 in property taxes. (If anyone out there has any actual figures instead of these estimates, please feel free to correct me).

(Since the building is being leased, the real estate tax will be paid by the Park Corporation.
According to the Kanawha County Assessors Office, the total appraised value of the stamping plant is $19.5 million with an estimated tax bill of $354,000.)

To be clear,  this analysis is not suggesting that this isn’t a “good deal” for the state. We think it is great that there is a possibility of creating new good paying jobs. Like we’ve said a million times, we are all for a strong economy and for government to play a smart role in economic development.  Our only aim with this post is to shed some light on what the fiscal impact might be on the deal.  Since these job subsides are taxpayer funded, the public has a right to know the costs and benefits. While history shows that deals like these often go sour,  we hope it not only works out but that it revitalizes auto parts manufacturing in the region.