Job loss accelerates in September – West Virginia’s disappointing trend of losing jobs continued in September as the state shed 3,200 jobs, marking the eighth straight month of job loss. So far in 2012, only January has seen a monthly increase in jobs. Total nonfarm employment stood at 747,500 in September, 12,800 jobs below its pre-recession level (Figure 1). The state’s unemployment rate ticked up to 7.6 percent, its highest level since December 2011 (Table 1). Read 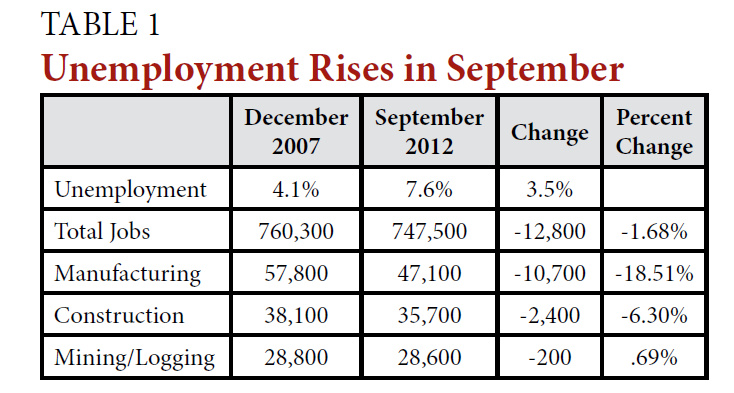 Job Growth Non-Existent Across the Economy

Only one of West Virginia’s major employment sectors saw any job growth in September, with the Other Services sector adding a meager 100 jobs, an increase of only 0.2 percent. Employment in the Government and the Education and Health Services sectors was flat, neither gaining nor losing any jobs in September. 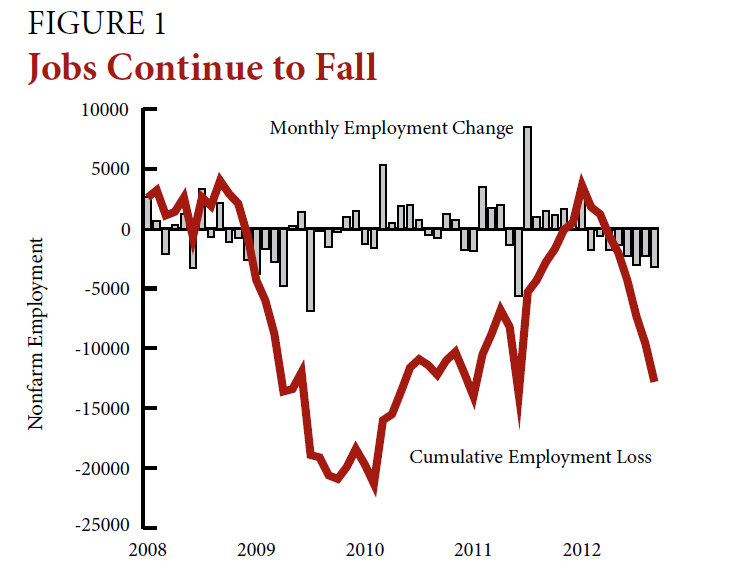 Seven of West Virginia’s ten major employment sectors experienced job losses in September. The Leisure and Hospitality sector lost the most jobs, with a loss of 700 jobs for a decline of 1.0 percent, while the Financial Services sector was hit the hardest, with employment falling 2.2 percent, from 27,300 to 26,700. Table 2 lists the number of jobs lost or gained by sector in September.

A Closer Look: What Type of Jobs Will Be Coming to West Virginia?

As the state’s population ages, the types of jobs available in West Virginia will change to suit the demands of an older population. The West Virginia Development Office has projected some of these changes, and has predicted which job markets will be growing the fastest.

The sector adding the most jobs from 2010 to 2020 is Education and Health Services – which mostly includes health-related occupations that serve our elderly population. All together this sector is expected to add 23,806 jobs. The Professional and Business Services sector is projected to increase by 13 percent and add 7,850 jobs.

Workers hoping to obtain these jobs in West Virginia will need higher levels of education. Only 20 percent of the projected 100 fastest-growing occupations require only a high school education. 27 percent will require some post-high school education, such as vocational school or an Associate’s degree. 36 percent of the fastest-growing occupations will require a Bachelor’s degree, with 11 percent requiring a Master’s degree and six percent requiring a Doctorate.

The opposite is true for the fastest declining occupations. 76 percent of top 100 fastest-declining jobs require only a high school education, and only 10 percent require a Bachelor’s degree or more. Since less than one quarter of the state’s workforce has a bachelor’s degree or higher, state leaders will need to explore ways to increase the education and skills of our current and future workforce.

Other figures from the Development Office report include:

In order to move more of West Virginia’s workers out of low-wage jobs, the state will need to make improvements in postsecondary education and skills development, economic development, and work support systems.