West Virginia’s unemployment rate in April 2011 was 8.8 percent, down from a high of 9.7 in December 2010, but still more than double its pre-recession levels. So while the state is doing slightly better, it still has plenty of room for improvement. But did the recession affect all areas of West Virginia’s economy the same? 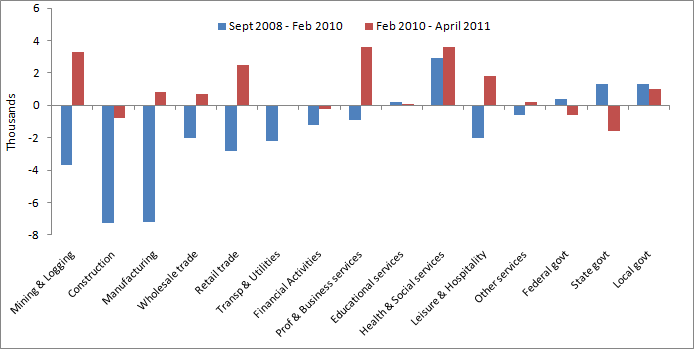 The chart shows that the mining, construction, and manufacturing sectors were hit particularly hard. The mining sector fell by 3,700, a decline of 11%, construction fell by 7,300 for a 18% decline, and manufacturing lost 7,200, a 13% decline. In contrast, the health and social services sector saw an increase of 2,900, good for a 3% increase during the downturn. The government sector also saw modest growth at all three levels.
Since non farm employment began to grow again in February 2010, mining, retail trade, and professional and business services have seen the biggest gains. The mining sector has grown by 3,300, an 11% increase, retail trade has added 2,500, a 3% increase, and professional and business services have added 3,600, a 6% increase. Health and social services continued to grow, adding 3,600 for a 3% increase.
On the other hand, construction continued to decline, losing an additional 800, while manufacturing’s increase of 800 was minor compared to its loses of 7,200. And despite seeing minor growth during the downturn, federal and state government saw employment losses during the upswing. Growth remained stagnant across the rest of the economy.