Raising the Tobacco Tax, For Health And Wealth

Bills introduced in both the Senate and the House this session propose to raise the tobacco tax in West Virginia by $1 per pack of cigarettes.  While it is a big increase from the 55 cents per pack today, it would actually only catch West Virginia up to the national average ($1.53 per pack) while still falling far short of the highest rate ($4.35 per pack in New York).  But why do it?  Because it would cut smoking rates, improve health, reduce medical costs, and stabilize the state budget — all for a measly 5 cents per cigarette.

Lots of West Virginians smoke, in fact we have the second highest adult smoking rate in the country, 44 percent higher than the national average.  The health consequences of smoking are pretty well known – higher rates of cancer, COPD, emphysema, early death, ugly yellow (sometimes missing) teeth.  These consequences are also expensive, resulting in as much as $1.3 billion in additional health care costs every year in West Virginia alone, much of which is funded by taxpayer dollars in the form of Medicare and Medicaid.

Figure 1: The percent of current adult smokers has dropped nationally since 2000 while increasing in West Virginia 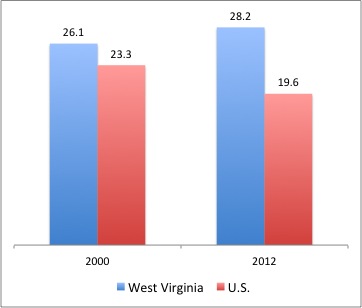 Sadly, West Virginia is one of the only states in the country that hasn’t seen a significant reduction in smoking rates in over a decade.  Since 2000, the percent of Americans who smoke has dropped from 23.3 percent to 19.6 percent, yet in West Virginia it has gone UP! (Figue 1 above) Since West Virginia’s last tobacco tax increase in 2003, 44 states and 2 territories have raised theirs a combined 88 times.  Meanwhile, evidence shows that increasing the tobacco tax rate decreases the number of people who smoke, especially among adolescents. According to Tobacco Free Kids, every 10 percent increase in cigarette prices reduces cigarette consumption by four percent, meaning a $1 per pack increase in West Virginia would have a substantial impact on tobacco consumption.  Even a simple comparison of tobacco tax rates to smoking rates show this trend (Figure 2). 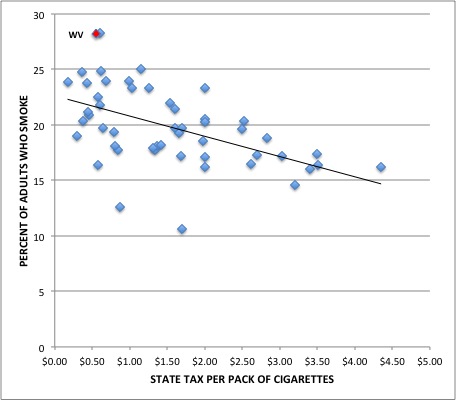 While decreasing illness and death in West Virginia by decreasing the number of smokers is a huge win that would make the whole thing worthwhile in its own right, the fact that raising the tobacco tax would also stabilize the state budget is incredible.  It’s like having your cake and eating it too!

Financial problems are especially pertinent right now in West Virginia.  Even after three consecutive years of budget cuts, the Governor’s office still recommended that we tap into our Rainy Day Fund, for the first time in history, to fill this coming year’s budget gap.  While Ted and Sean have talked in length about how these budget problems are largely self-imposed (here and here for example), the simple fact of the matter is that West Virginia has insufficient revenue and is projecting additional budget shortfalls for the next two fiscal years.

Increasing the tobacco tax by $1 per pack will generate more than $130 million in additional state revenue.  This year alone the Governor is recommending taking $84 million from the Rainy Day Fund to pay for Medicaid.  Raising the tobacco tax (and dedicating the additional revenue to Medicaid like the Senate bill does) would not only fill the Medicaid gap this year, but give us a $50 million dollar head start on paying for it next year, plus all of that additional revenue year after year.

Whatever the political forces are that are holding this bill up (again, for the nth year in a row) are beyond me, but the logical move is pretty straightforward: raising the tobacco tax is a win-win situation for West Virginia.  Plain and simple. Black and white. Cut and dried.