Currently, wages over a certain yearly total ($110,100 this year) are exempted from Social Security payroll taxes. Raising or eliminating this cap could help strengthen Social Security’s finances, but for how long and who would it affect?
In 2010, the Congressional Research Service looked into the question, and analyzed four different scenarios, shown below. 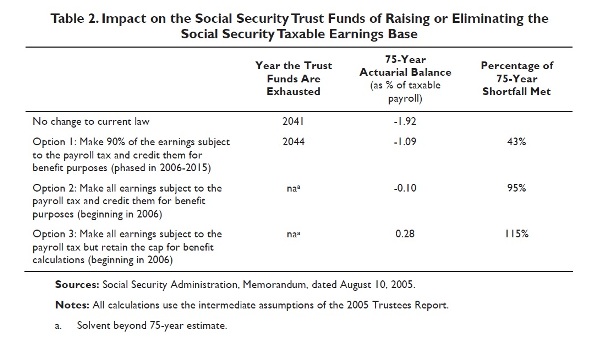 Under current law, the Social Security Trust Fund is projected to be exhausted in 2041 (now revised to 2038), and then run a long term deficit of 1.92%.
Option 1 would make 90% of all earnings subject to the tax (which would have been an effective cap of $171,600 in 2006), and also increase benefits to those paying higher taxes. This would have only made the trust fund solvent until 2044, and then run a long term deficit of 1.09%. Over the long term, only 43% of the shortfall would be met.
Option 2 would eliminate the cap, but also increase benefits accordingly. This would keep the trust fund solvent beyond the 75 year projection, but Social Security would continue to run a small deficit of 0.1%.
Option 3 eliminates the cap, but does not increase benefits. This too keeps the trust fund solvent, and Social Security would actually run a long term surplus.
The current legislation in Congress, eliminates the cap for incomes above $250,000, creating a “donut hole” in the payroll tax from $110,000 to $250,000, but wouldn’t increase taxes for anyone making under $250,000.
According to Chief Actuary of the Social Security Administration, this proposal would also keep the trust fund solvent for at least 75 years, and the program would run a long term surplus.
How many people would be paying higher taxes under this proposal? According to CEPR’s estimates using the 2010 ACS, about 1.96 million workers earned incomes over $250,000, or about 1.4 percent of all workers. The effect in the Mountain State would be even smaller. Only 328 workers earned more than $250,000 in West Virginia, effectively 0.0 percent of all workers.
The small number of those affected by the proposed elimination of the cap is unlikely to increase. According to the above CRS report, 83% of workers never earn over the current cap in their lifetime, and only 5% earn over the current cap for more than 6 years. Eliminating the cap on income over $250,000 would affect very few workers, even as they move through income levels.
Seeing that Social Security makes up 9% of the state’s personal income, and is likely to grow, it is important for West Virginia’s economic future that the financial state of Social Security is strengthened and protected.