Yesterday, I had the privilege to discuss efforts to raise the minimum wage with Hoppy Kercheval on his Talkline show. Today, Hoppy followed up with this commentary, arguing that raising the minimum wage is bad economics because it wouldn’t actually help the working poor. But, the facts that Hoppy cites in his commentary don’t really support that argument.

Hoppy points to research from economist David Neumark, who says that 29% of the benefits of raising the minimum wage to $10.10 would go to families with incomes at least three times the poverty level (if David Neumark sounds familiar, he’s the economist whose work on the employment effects of the minimum wage isn’t terribly objective).

It’s also worth mentioning that three times the poverty level still isn’t exactly living the high life. In 2012, three times the poverty threshold for a family of four was $70,476. That’s lower than the median four-person family income of $76,049. So, one could say that in addition to 70% of the benefits of raising the minimum wage flowing to poor families, most of the remainder is helping out the middle class, which I’m sure we all agree could use it. Doesn’t sound like “bad economics” to me.

We already know the demographics of who benefits from the increase in West Virginia’s minimum wage, and by-and-large it’s low-income workers supporting their families. An increase to $10.10 doesn’t change much. The average family income of a worker who earns less than $10.10/hour in West Virginia is less than $35,000. When you talk about raising the minimum wage, you’re talking about helping low-income families.

Finally, Hoppy is right that the Earned Income Tax Credit (EITC) is a very effective tool for fighting poverty and helping low-income families. But for a commentary all about how the EITC is preferable to minimum wage because it targets low-income families better, he’s been strangely silent on recent changes to the Child Tax Credit (CTC), which is closely related to the EITC. A bill passed by the U.S. House of Representatives and supported by Rep’s Capito and McKinley increased the maximum earnings level of the credit, while letting the reduced earnings minimum expire. In effect, the House voted to reduce the CTC for low-wage workers and increase it for high-wage workers. 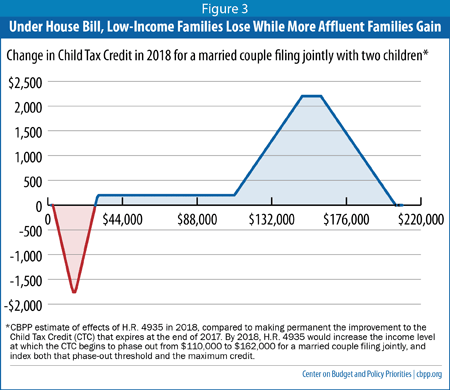 While a single parent earning the minimum wage, working full time would no longer be eligible for the credit, couples making between $150,000 and $205,000 with two children would become newly eligible. The disproportionate changes to the CTC are far more egregious than the fraction of low-wage workers working in high-income families who benefit from a minimum wage increase. But it didn’t create much outcry from the likes of David Neumark and Hoppy Kercheval. Maybe because tax forms are dull and complicated and the minimum wage debate has a sexier ring to it.