George Hohmann has an excellent piece (and graph) in today’s Charleston Daily Mail on the uneven recovery among the state’s industry sectors. In a nut shell, since we are an energy state and are heavily reliant on federal transfers (think about our elders: Medicaid/Medicare/Social Security), we’ve seen strong growth in the mining and health care sectors. The growth in these two sectors is the central reason West Virginia has outperformed many other states since the beginning of the recession. From December 2007 to April 2012, West Virginia has lost only 0.1% of its jobs compared to the national average of 3.6%. Among the 50 states and DC, West Virginia ranks 9th best in job performance since the beginning of the recession.

While it is great West Virginia’s economy is “doing better” than most states since the beginning of the recession, there are a few questions that we need to ask. First, does the picture change if we start at the point of recovery (June 2009) instead of the beginning of the recession? This is especially important because West Virginia was about a year late to the recession.  Second, how much of the state’s performance is tied up with federal transfers?
Lastly, how many jobs do we need to get back to pre-recession employment? 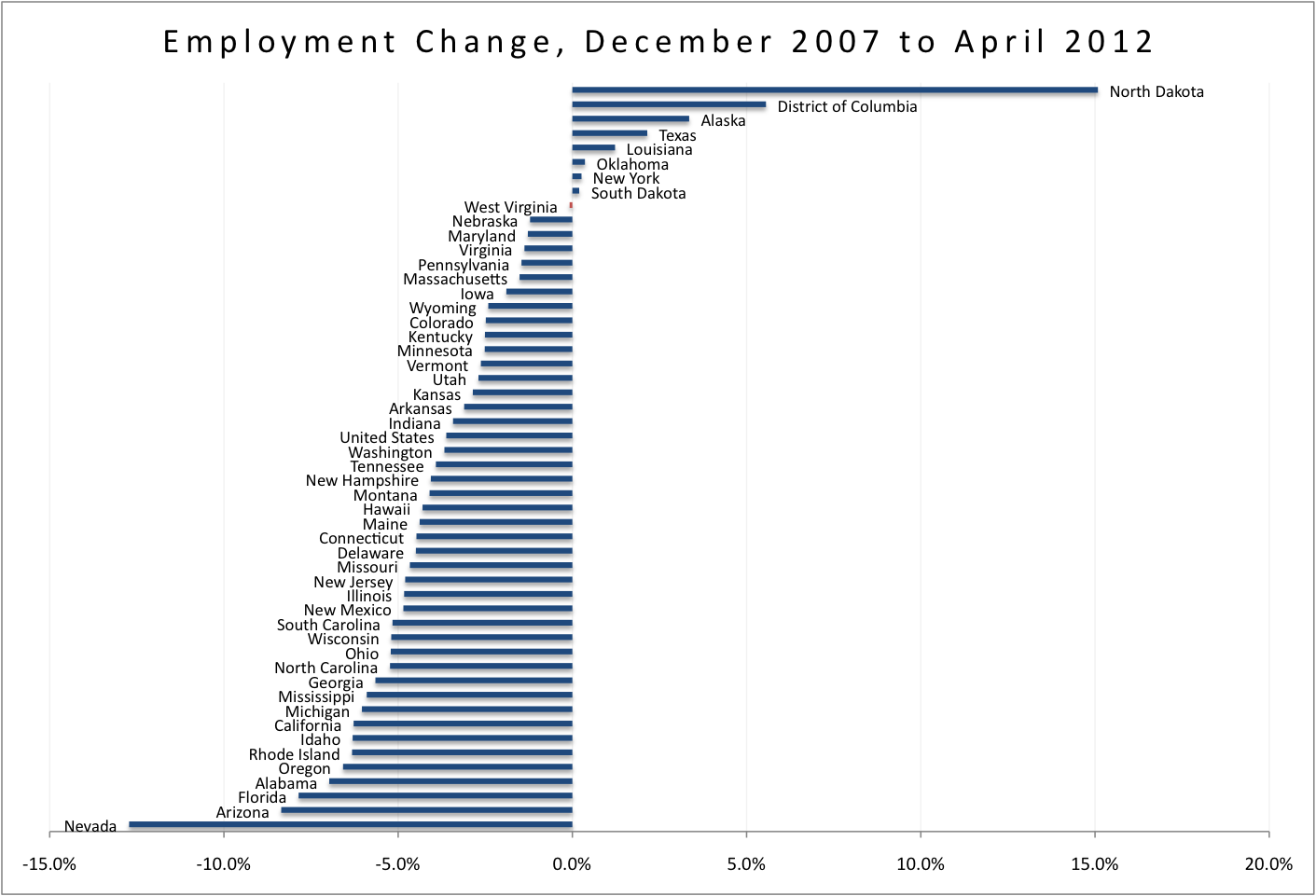 However, if we want to measure which states have “recovered” the best from the recession, we need to look at job growth from when the recession officially ended (June 2009) to today. When we do this, the picture changes. The Mountain State now ranks below the nation as a whole and 21 states are recovering better than West Virginia. What this really tells us is that the recession never hit West Virginia as hard as other states (for reasons explained here). 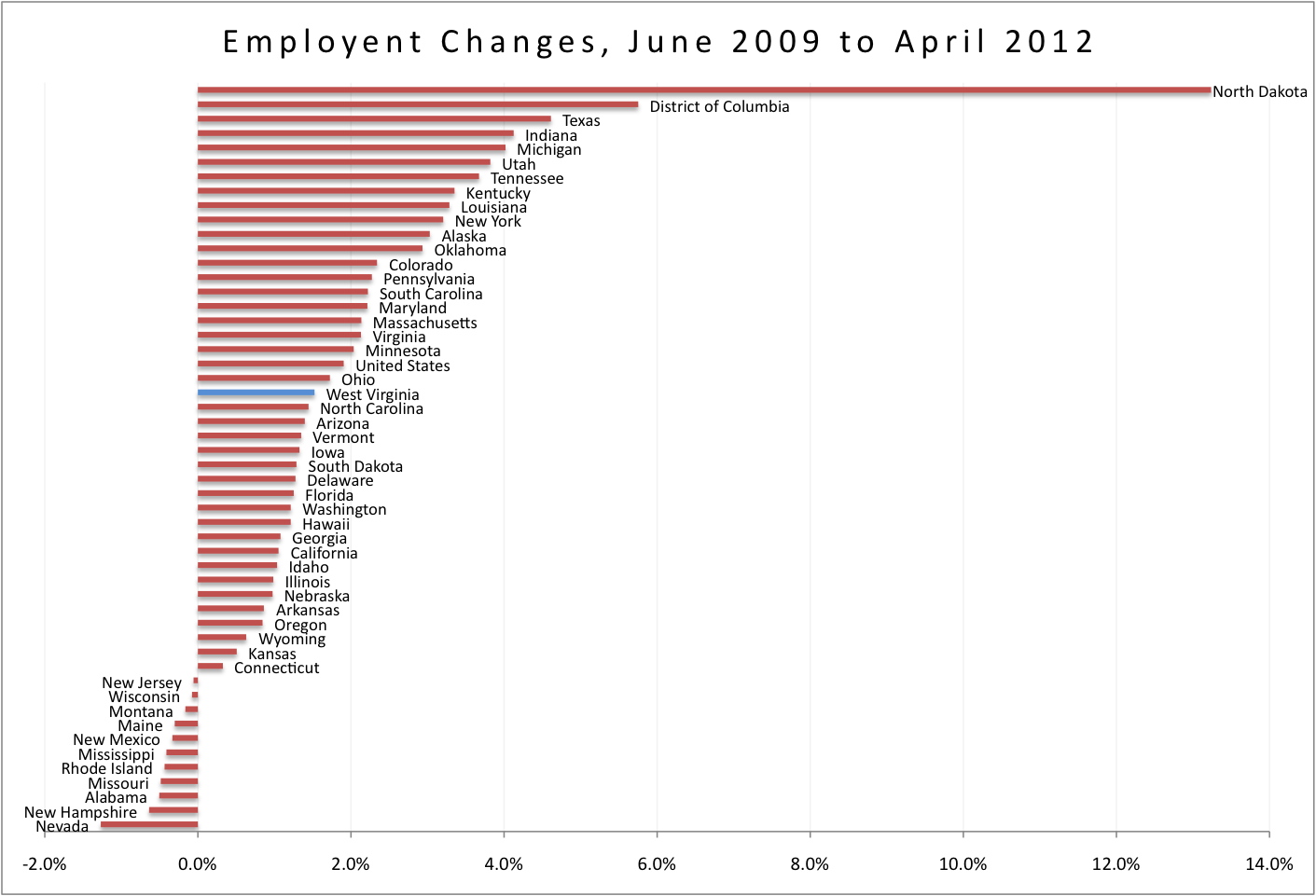 One of the central reasons why the Mountain State performed better since the beginning of the recession is that our state disproportionally benefits from automatic federal stabilizers (e.g. food stamps) and stimulus spending. As the two charts below illustrate, federal transfers (Social Security, Medicaid, Medicare, SNAP, etc.) grew from 24 percent of West Virginia’s personal income at the beginning of the recession to over 26 at the end of 2011. 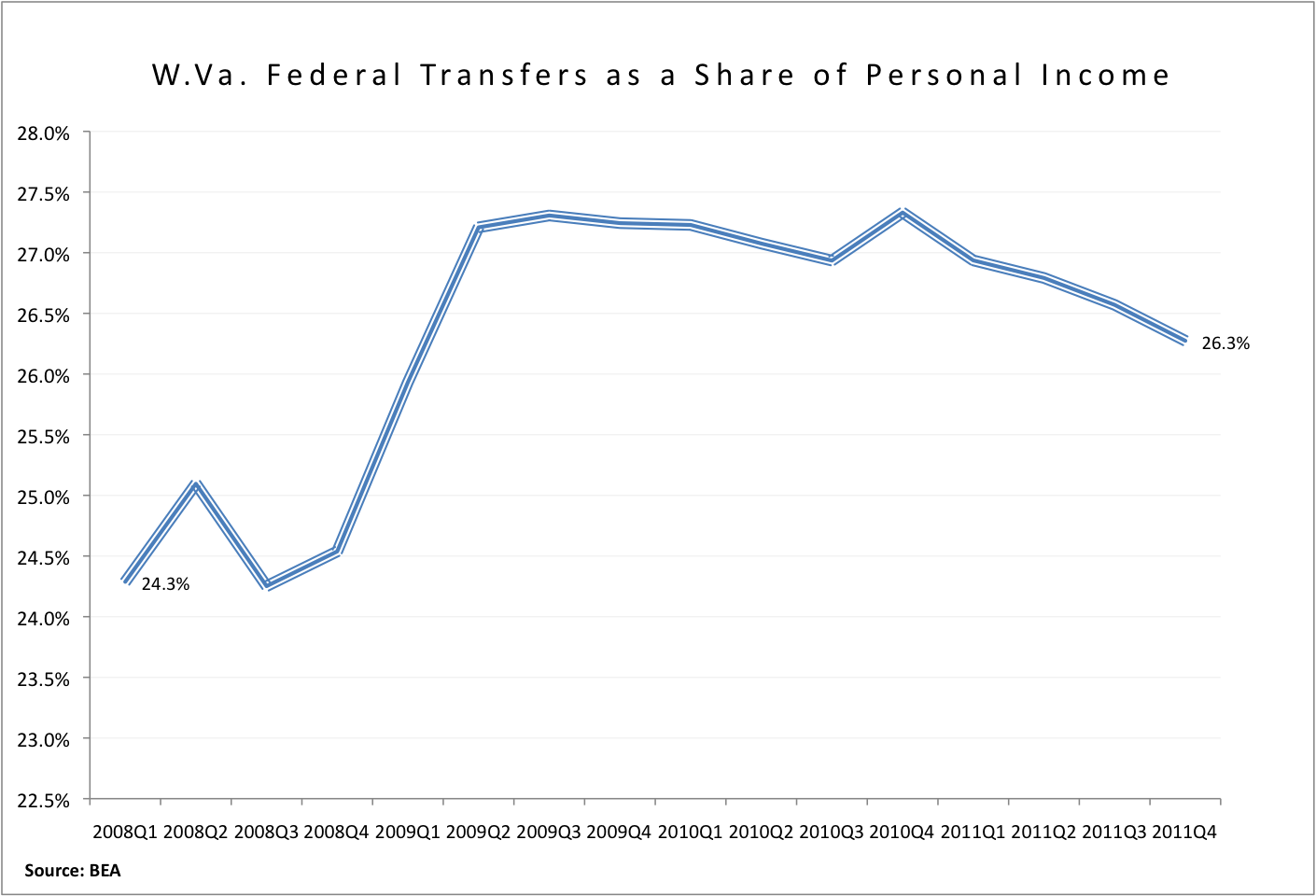 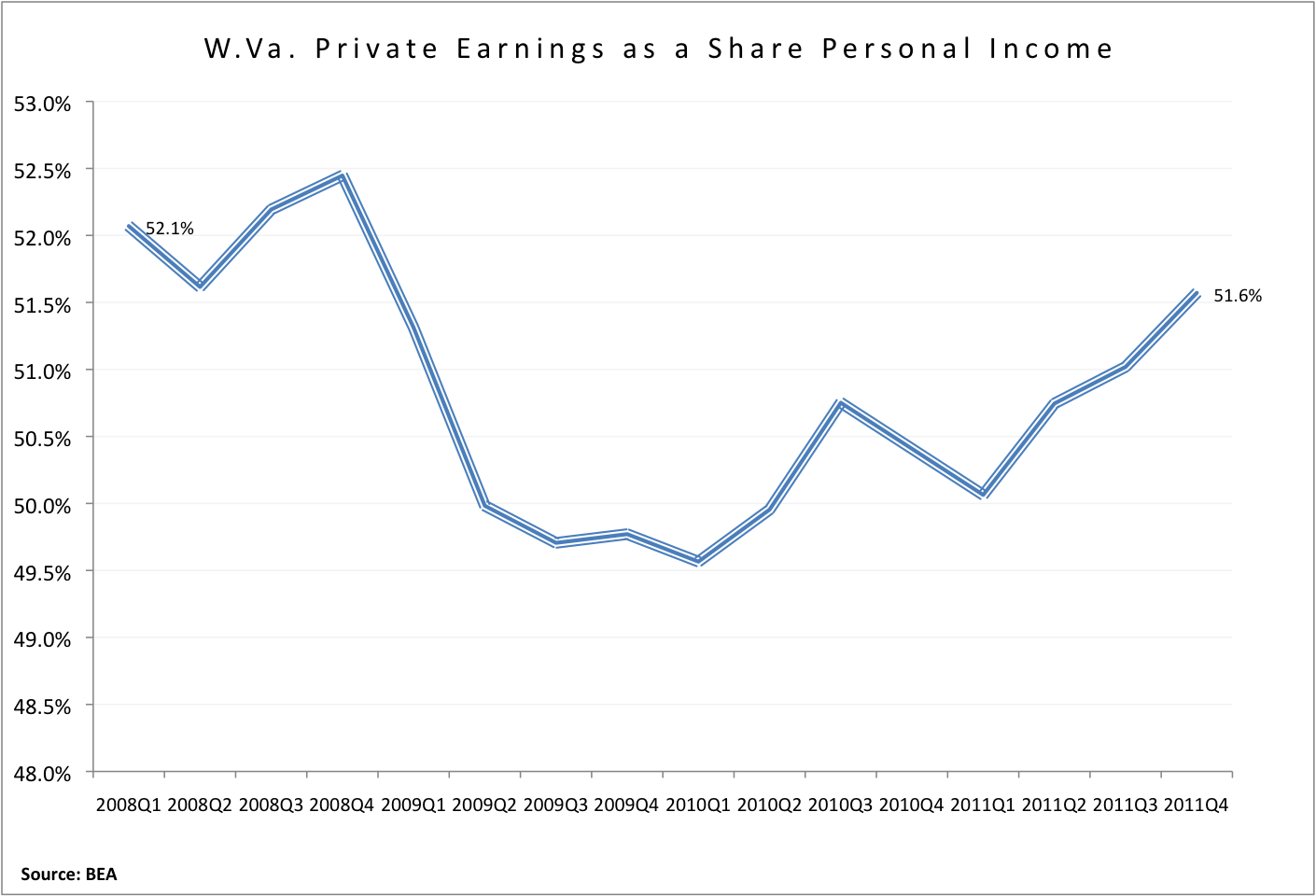 From the first quarter of 2008 to the fourth quarter of 2011, personal income in West Virginia grew from $56.4 billion to $63.1 billion – a gain of $6.7 billion. Over this same time period, private sector earnings grew by  approximately $3.2 billion and federal transfers grew by $2.9 billion. Public sector earnings over this period grew by $911 million, with mining growing by $873 million and health care by $706 million. What these numbers tell us is that West Virginia’s above average performance during the last four years has a lot to with the federal government.  This is because we have an older and poorer population that is disproportionally eligible for federal programs like Medicaid and Social Security. 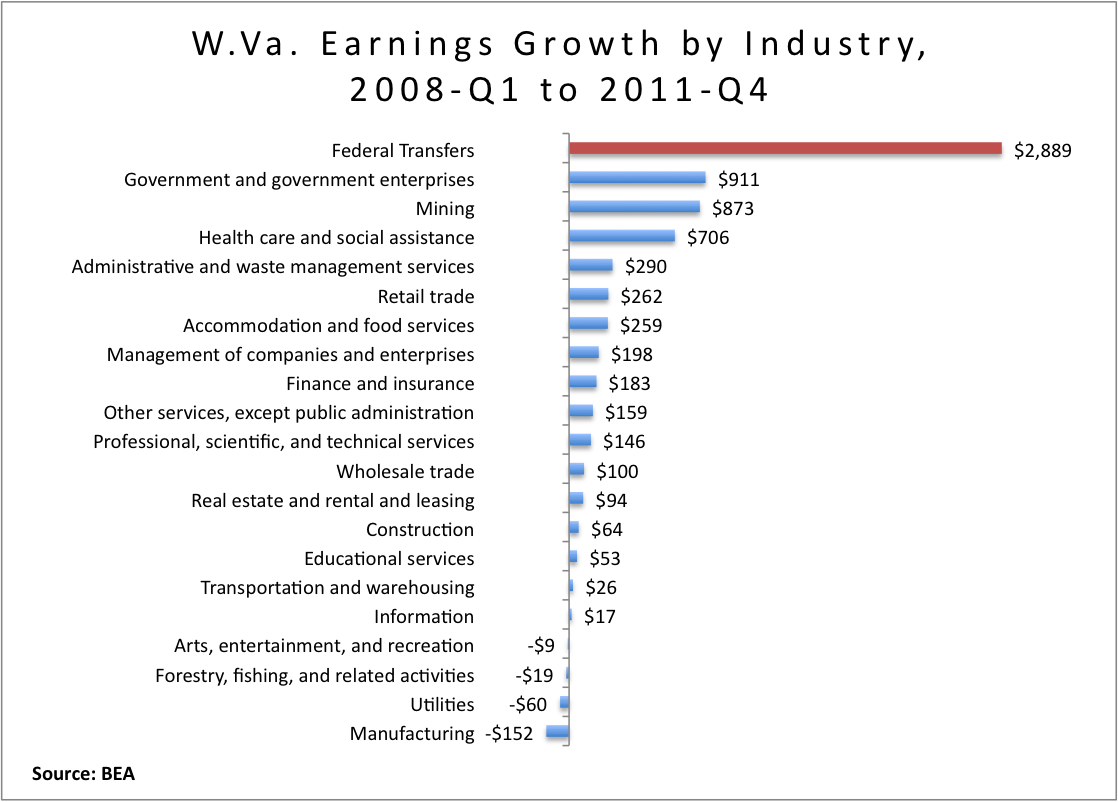 Lastly, let’s take a look at the jobs deficit in West Virginia. When the recession began in December 2007, the Mountain State had 760,300 jobs.  Since then, the state has experienced 23 months of job loss. Our state’s employment trough occurred in February 2010 when we had 21,300 fewer jobs than we did before the recession started. Now in April, 2012, we have 600 fewer jobs.

However, West Virginia’s job deficit, or the difference between the number of jobs our state has and the number it needs to regain its pre-recession employment rate, is 23,800. This number includes the 600 jobs the state has lost plus the 23,200 jobs it needs to keep up with the 3.1% growth in population that West Virginia has experienced in the 52 months since the recession began.

While the Mountain State has weathered the recession better than most, we still have a long way to go before we can uncork the champagne.  However, this will only happen if we first have a clearer picture of how we’ve got to where we are today.