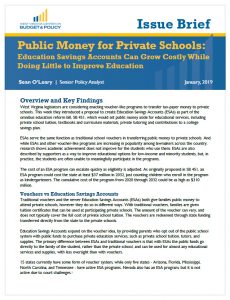 West Virginia legislators are considering enacting voucher-like programs to transfer tax-payer money to private schools. This week they introduced a proposal to create Education Savings Accounts (ESAs) as part of the omnibus education reform bill, SB 451, which would set public money aside for educational services, including private school tuition, textbooks and curriculum materials, private tutoring and contributions to a college savings plan. PDF of full report.

ESAs serve the same function as traditional school vouchers in transferring public money to private schools. And while ESAs and other voucher-like programs are increasing in popularity among lawmakers across the country, research shows academic achievement does not improve for the students who use them. ESAs are also described by supporters as a way to improve educational options for low-income and minority students, but, in practice, the students are often unable to meaningfully participate in the programs.

The cost of an ESA program can escalate quickly as eligibility is adjusted. As originally proposed in SB 451, an ESA program could cost the state at least $37 million in 2032, just counting children who enroll in the program as kindergarteners. The cumulative cost of the program from 2020 through 2032 could be as high as $310 million.