On Monday, the Department of Homeland Security (DHS) and the Trump Administration finalized their public charge rule, which will allow immigration officials to deny green cards and citizenship to immigrants or would-be immigrants who are determined likely to receive even modest assistance from programs like SNAP and Medicaid at any point over their lifetimes. This rule is such a radical expansion of the public charge definition that more than half of all U.S. born citizens would fail the “public charge” test were it applied to them.

Beyond the immigrants who will be directly impacted by this change, the rule is also expected to have a widespread chilling effect- where those who already have green cards or citizenship or family members of those directly effected will disenroll from vital benefit programs out of fear. We’ve already seen significant disenrollments of immigrants from the Women, Infants, and Children program (WIC) during the time that the proposed rule was being considered.

In West Virginia, an estimated 12,500 residents are at risk of direct impacts or chilling effects of the public charge rule when implemented. This figure includes families with at least one non-citizen with incomes below 250% percent of the poverty level, according to data from the 2012-2017 5- year American Community Survey. These are the families who are most likely to be using the benefit programs targeted by the public charge rule change, and mostly liking to face a “chilling effect.” 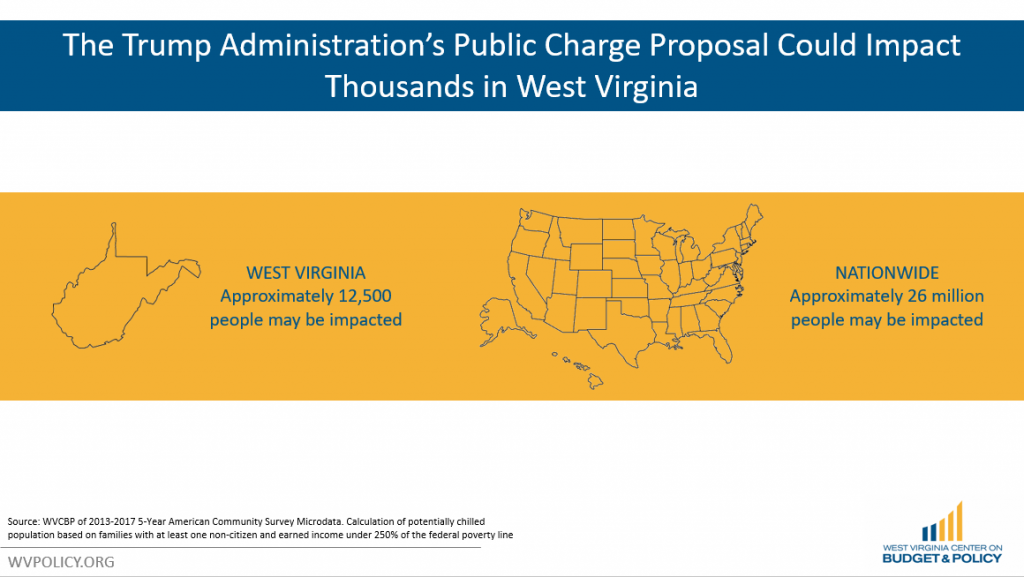 This rule essentially punishes low-income workers for their employers paying them low wages- leading them to have to supplement their pay with public benefit programs to which they are legally entitled but could now be punished for needing. It also assumes that immigrants and their US-born children will contribute little to the US economy when that is untrue. Studies have shown that child of immigrants attain more education and have higher earnings than their parents. Second generation members of immigrant groups often meet or exceed the schooling level of native-born Americans.

The impacts on our economy and health care system affect us all. A George Washington study estimates that approximately 646,000 individuals will directly lose Medicaid coverage nationally due to this rule, causing a loss of $624 million in Medicaid revenue to community health centers and the loss of 6,100 medical jobs.

The Trump Administration’s public charge rule is an attempt to remake our immigration system- without Congressional approval- into one that only welcomes those who are already wealthy or who have significant means. This violates our values and ignores that immigrants fill important jobs and contribute to economic growth at all levels of income.

The finalized rule is scheduled to be go into effect on October 15, 2019, but lawsuits are expected. Those who think they may be impacted by the rule should consult with immigration law experts prior to disenrolling from public benefit programs. More information can be found here.