Irresponsible budget cuts that slash basic funding for education, public safety, and roads put our state at risk and hurt our families. We are rolling out our Protect West Virginia campaign next month in hopes of holding lawmakers accountable and demanding real budget solutions to preserve our heritage, safeguard our communities, and secure the state’s future.

West Virginia’s budget deficit is more than $400 million. Not acting means watching 10,000 students lose the PROMISE scholarship; asking our K-12 students to learn in overcrowded classrooms and allowing thousands of teachers and support staff to be laid off; and limiting services vital to senior citizens.

Leading up to the campaign’s launch, here are a few ways to get involved with Protect West Virginia:

– Connect with us at info@protectwv.org to write a Letter to the Editor or an opinion piece;

– Participate in the Protect West Virginia campaign launch in January; and

– Engage with us on social media.

The Our Children, Our Future Campaign is celebrating its victories and looking ahead to 2017.

With its supporters’ help, in the last four years the organization has effectively campaigned to raise the minimum wage, expand school breakfast offerings, and reduce small business regulations.

The campaign is finalizing its 2017 platform and wants your input. Vote here to help select the remaining four initiatives in the 2017 platform.

The Working Families coalition met Monday, December 12 to discuss successes and future plans to make West Virginia the 27th state to enact a state Earned Income Tax Credit. The coalition came to a consensus on its strategy for the upcoming legislative session as well as a long-term vision on policies and action that support West Virginia’s low-wage working families.

A little fun was had as well; coalition members took to social media to share this EITC video produced by the Center on Budget and Policy Priorities. View.

The West Virginia Center on Budget and Policy supports enacting a state EITC for working people to help them offset the cost of various state and local taxes they pay.

In the News This week, the WVCBP released its ninth annual State of Working West Virginia report. Read.  The Associated Press and various other media outlets picked up the report that investigates why resource-rich West Virginia is so poor. Read.

The report sho ws West Virginia remains one of the poorest states in the nation and suffers from a resource curse. The state has seen little job growth since the Great Recession and many of the state’s high-wage jobs have been replaced with low-wage jobs in recent years. West Virginia’s labor force participation rate remains the lowest in the nation and is at its lowest since the late 1980s. Trickle-down economics have often failed to produce stronger economic growth or a better quality of life. In order to increase incomes in the state, educational levels, as well as the amount of innovative research being conducted in West Virginia, must increase. 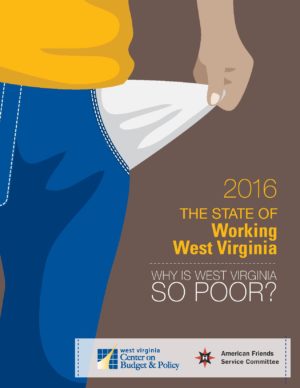 Renate Pore in a Charleston Gazette-Mail opinion piece writes that while the Affordable Care Act (ACA) is not perfect and many things need to be improved, to repeal the health care law without a replacement would be a catastrophe. “It will hurt just about everybody — people, health care providers, and the insurers,” Pore said.  Read.