For President Trump’s proposed Federal “Blueprint” Budget for 2018, the bottom line is clear: West Virginia stands to lose more than any other state. The proposed budget, which was sent to Congress virtually unchanged from its original form in March, cuts discretionary funding for major federal agencies by $54 billion and it is estimated to cut mandatory funding by $5 billion for 2018, and an estimated $800 billion over the next 10 years. Discretionary funds are appropriated by the federal government to states for vital services and programs, while mandatory funds go toward safety net programs that bypass the state legislature.

West Virginia relies more on federal assistance than other states because of our high poverty rates, low-wage jobs, and our generally unhealthy and aging population. In FY 2017, West Virginia received over $965 million dollars for discretionary spending from the federal government, which will be reduced by nine percent, or about $86.5 million overall, in the president’s FY 2018 proposal. The cuts at the federal level will shift the responsibilities onto states to provide the necessary funds to maintain discretionary programs such as 21st Community Learning Centers and the Appalachian Regional Commission. It is highly unlikely West Virginia would chose to fund any of these programs.

Cuts to mandatory funding will have a deep impact as well. In FY 2017, the state received over $4 billion in mandatory funding, for programs like Medicaid, Supplemental Security Income, Social Security and Disability Income, and Supplemental Nutritional Assistance Program. If the president’s proposal is enacted, West Virginia will lose about five percent or $187 million, of those funds next year. West Virginia is in no position to inherit this combined $273 million expense next year in light of the current budgetary shortfalls. Over the next 10 years, that number will grow as reductions in vital safety net programs such as SNAP begin in 2020.

The fiscal impact of the elimination of federal grant programs by the president’s budget will vary from state to state. Some states simply require less federal assistance than others due to the relative disparities in economic strength. A $94 million reduction in discretionary funds is disconcerting because it will lead to increased economic insecurity and decrease access to programs that provide basic housing, nutritional, and health needs. These funding cuts will come from eliminating educational programs, vouchers for nutritional and housing needs, job training programs, and other federal initiatives aimed at economic development in Appalachia’s rural communities. The only department that is not seeing any cut is the Department of Transportation, which is getting a $9 million increase. However, this slight increase counts for only 1 percent of the total discretionary funds. 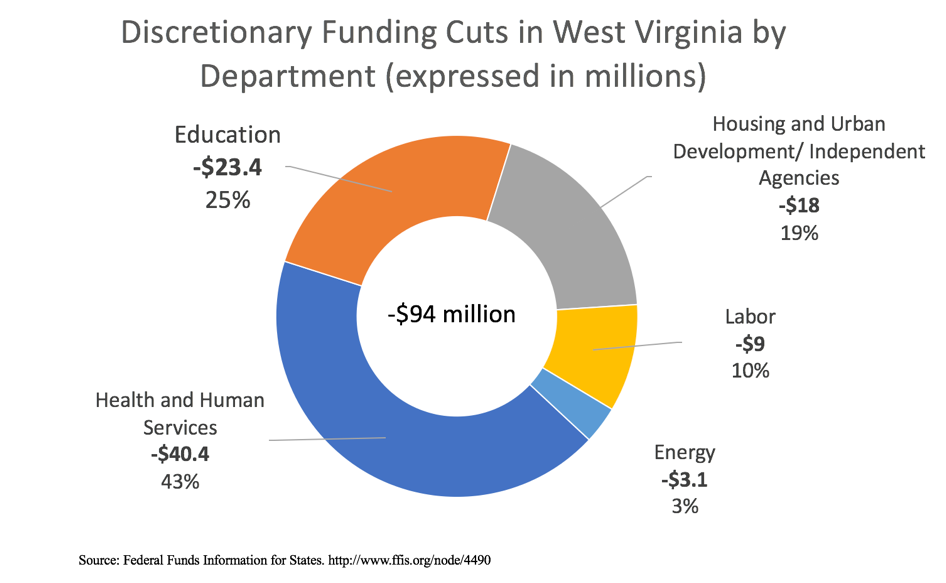 The Department of Education has served an estimated 200,000 West Virginian students since 2004 through the 21st Century Community Learning Centers program, which provides academic enrichment opportunities during non-school hours for children, particularly those who live in high poverty and low performing school districts. President Trump’s budget completely eliminates this program. As of 2014 there are 133 sites across the state providing mostly elementary students with resources to meet state and federal education standards.

The Appalachian Regional Commission (ARC), which the President singled out and entirely eliminated under his proposed budget, was one of the most ambitious programs currently investing in West Virginia and the Appalachian region. The ARC brought nearly $24.1 million to 55 projects throughout West Virginia in the last two years and was set to attract nearly $28 million more in private investment to create economic opportunities, a ready workforce, and critical infrastructure.

Cuts to mandatory funding could be somewhere around $800 Billion over the next 10 years, according to experts. Programs that serve as a basic safety net have long since been considered instrumental to the country’s national wellbeing. For example, without Social Security an additional 122,000 seniors in West Virginia would live in poverty. In West Virginia, and in many other states, safety net programs are also a large share of the state’s economy.

The Supplemental Nutritional Assistance Program (SNAP), also known as food stamps, which helps struggling families and workers put healthy food on the table, reached nearly 357,000 West Virginians, or 20 percent of the state’s population and put approximately $499 million into West Virginia’s economy. The president’s proposal cuts $193 billion (25 percent) of SNAP’s funding nationally over the next 10 years. For West Virginia, that would mean an annual state contribution of $125 million, and $869 million over the next 10 years to replace the loss in federal funds.

West Virginia will likely see deep cuts in Supplemental Security Income (SSI) and Social Security Disability Insurance (SSDI), as well. SSI and SSDI benefits go directly toward low-income households who had professional careers cut short due to a disability and families caring for children with disabilities such as down syndrome, autism, and blindness. The president’s proposal cuts $72 billion over 10 years to disability programs, including SSI and SSDI. A reduction to these funds will mean those already struggling to make ends meet will struggle even more for the assistance they need to support themselves and their families and stay out of bankruptcy. Once again, West Virginia relies more on these programs than any other state.

The president’s proposed budget is an effort to reduce overall federal spending on programs and strengthen the military, it achieves this through targeting the nation’s poorest and most vulnerable populations by drastically reducing funding for the programs they rely on. The figure below is an illustration of major federal programs (SNAP, SSI, SSDI, Medicaid, and Medicare) together as a share each state’s personal income. West Virginia stands to lose the most from the funding cuts proposed by the president not only in real dollars flowing into the state, but perhaps even more importantly, in the quality of the services these programs provide (Figure 1). 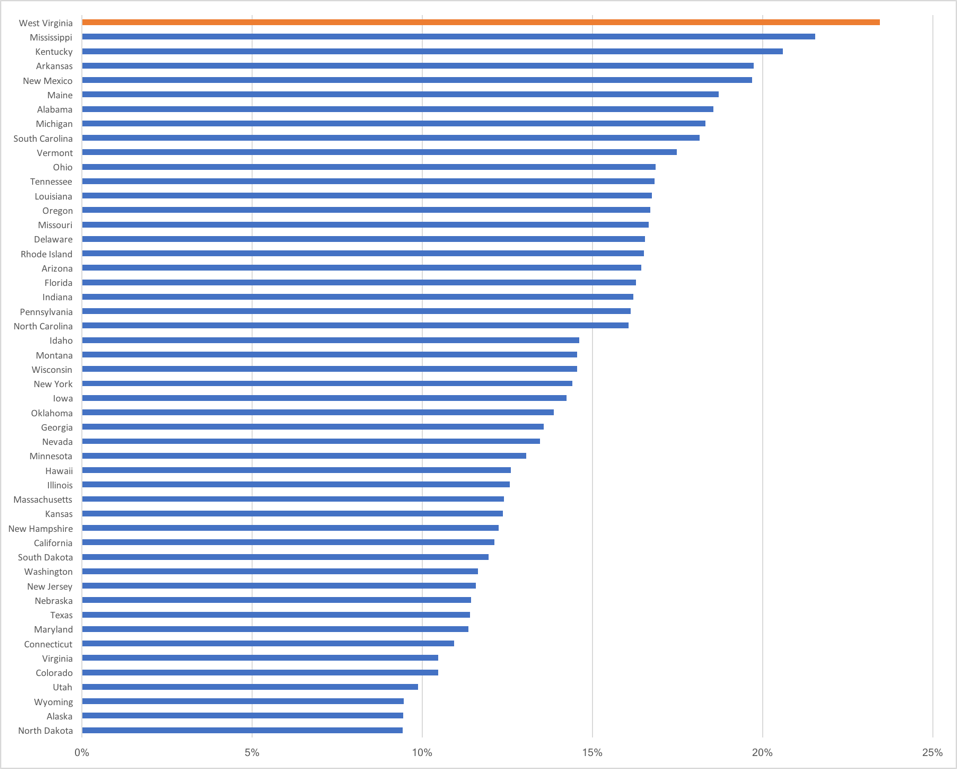