Pay Us More Money and We’ll Protect You From Obamacare

The Big, Bad, Scary Wolf that is Obamacare is coming after the West Virginia Center on Budget and Policy.  At least that’s what our insurance provider wants us to think.

In a letter sent to the office a couple of weeks ago, Highmark Blue Cross Blue Shield plays the Obamacare fear card, and then, somewhat astonishingly, offers to renegotiate our existing contract for “only” a five percent increase.  The move wreaks of inappropriate opportunism. 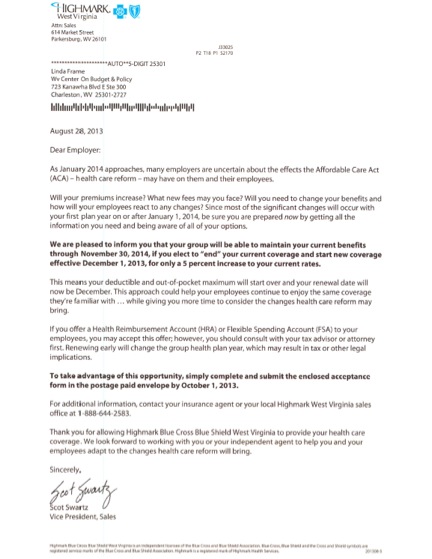 The letter opens by stating that many employers are uncertain about the effects of the Affordable Care Act (which is true).  Playing to this uncertainty, it then suggests that our premiums will increase, while we face new fees, and employees will lose benefits.  Granted, they don’t outright say that this will happen but the insinuation is clear as day.

After having fully scared the pants off the reader at this point, Highmark comes through to save the day with a seemingly generous, altruistic offer:

“We are pleased to inform you that your group will be able to maintain your current benefits through November 30, 2014 if you elect to “end” your coverage and start new coverage effective December 1, 2013, for only a 5 percent increase to your current rates.”

The letter continues that opting to take-up this offer would mean that deductibles and out-of-pocket maximums would reset.  Finally, to take advantage of this opportunity, all we need to do is submit the acceptance form (with a pre-paid envelope thoughtfully included) by October 1st, ironically the very same day that enrollment in the ACA officially opens.

There are three serious problems with this letter: first, it’s intentionally misleading by suggesting that our premiums will go up under the ACA when the opposite may very much be true.  Additionally, for a small organization like ours, it’s likely that beginning in 2014 we will be able to find a better deal on the Marketplace than off of it.  It’s evident that Highmark recognizes this, which is exactly why they are trying to scare us and other organizations into submission now.

Secondly, not only are they fear-mongering in an attempt to lock us into a new contract before we have an opportunity to evaluate potentially better options under the ACA, they’re using this scare-tactic to convince us to accept yet another rate increase.  Our insurance contract was just renewed this past August with a 9.97% increase at the time.  That means that accepting this offer would be a total 15.47% rate increase in just two months’ time, while simultaneously resetting deductibles and out-of-pocket maximums for all of our employees–a double whammy.

Finally, they conveniently leave out what happens if we choose not to accept this offer, which would be…absolutely nothing.  In fact, not accepting this offer would mean that we are choosing to avoid a guaranteed five percent rate increase while giving ourselves more options going forward.  While the effects of the ACA are uncertain, there is a lot of evidence recently to suggest that rates may actually go down after 2014.  Even though the letter suggests that we should be “prepared now by getting all the information you need and being aware of all your options,” locking in to a new contract means we won’t be able to get that information before renewing.  The letter and an accompanying email from our insurance agent suggest that we have to “take action” with no indication that an option we have is to take no action.

Even though insurance providers are poised to be the big winners of health care reform with millions of new customers, they do face a lot of uncertainty along with everyone else as the ACA is fully implemented.  Nevertheless, this tactic of trying to play into the fears of Obamacare for their own benefit strikes me as disingenuous and, quite honestly, a little bit slimy.  Unfortunately, I have a feeling it will work on many organizations.