Surprise! West Virginia has a budget problem — about a $200 million problem, in fact (you can read all about it here, here, and here!).  Oddly enough, Medicaid, which for years has taken the brunt of the blame for anything budget related, has hardly been mentioned in the fervor.  This is especially odd because the whole debate stems back to the governor’s original recommendation to use $84 million in Rainy Day funds to plug the projected hole in this coming year’s Medicaid budget. So, while in years past state legislators would make a big fuss about Medicaid before passing a balanced budget because there was sufficient revenue, the year in which there actually isn’t sufficient revenue for Medicaid is the year it somehow manages to escape everyone’s notice. Strange indeed. Regardless, there is one very easy out that these legislators would be wise to pass that would generate $130 million per year, all but solving the current budget crisis and completely closing the Medicaid budget gap for this year, and the next, and the next. What is this Holy Grail?  The tobacco tax, of course.

West Virginia has struggled to fully fund Medicaid for a number of years, having to take one-time money to cover shortfalls in the Medicaid budget (figure below) using year-end supplemental reappropriations, mid-year budget reappropriations, one-time reductions, and trust fund draw downs. You’d think that legislators would get the hint that there is a structural problem in the way West Virginia funds Medicaid after having to go through this exercise again and again.  Unfortunately, the 2015 budget year is even uglier though as the one-time money is drying up since collections are down, meaning that West Virginia may have to dip into its Rainy Day fund for the first time in history.

Even more importantly though is what happens in the budget years beyond 2015. The $84 million in Rainy Day funds that would be used this year will become part of the Medicaid base budget forever, meaning that we will have to come up with that money in 2016 and beyond as well.  And that doesn’t even include the normal growth of the program, projected to be an additional $36 million in 2016 on top of the $84 million this year.  Tapping the Rainy Day fund to fill the 2015 budget gap doesn’t solve the budget crisis as much as kick it down the road to next year’s legislative session with an even bigger hole to fill. 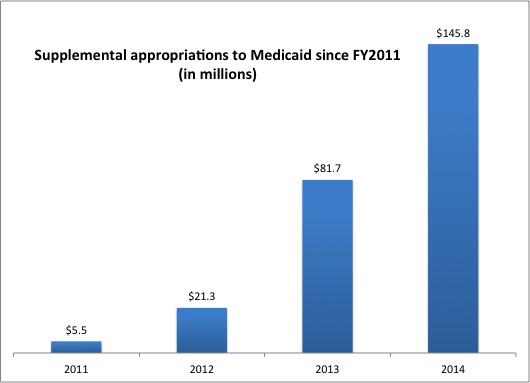 So, how do we get out of this one-time funding cycle?  The answer is surprisingly simple —raise the tobacco tax.

There are tons of reasons to raise the tobacco tax. Primary among them is the health of our state. West Virginia ranks last in the country in overall health yet we’re doing very little to address the underlying, fundamental problems that contribute to it.  We have the second-highest smoking rate yet one of the lowest tobacco taxes in the country. Meanwhile, studies have shown that substantial increases in tobacco taxes have measurable impacts on the proportion of smokers, especially younger smokers. There are many groups that are fighting for an increase in the tobacco tax for these health reasons alone.

While the battle for higher tobacco taxes for health is a valiant effort, a completely different reason to do it is for the health of our state budget. With three consecutive years of budget and program cuts already, West Virginia legislators are staring down budget shortfalls for another three years to come.

Senate Bill 534, introduced by Senator Plymale, proposes a $1 per pack increase on cigarettes and brings the excise rate on other tobacco products up to 50% from 7%. While an additional $1 per pack is a substantial increase from the current rate of 55 cents, it would simply align West Virginia’s rate with the national average. SB 534 takes previous versions of the tobacco tax proposal further by directing the revenue from the increase into the Medicaid Trust Fund for the next two fiscal years, ensuring that Medicaid is fully funded and that the Rainy Day Fund is left untouched.

Raising taxes takes political will. Unfortunately, state legislators have shown for many years on end that they lack the will to address two of our most pressing problems in West Virginia – high smoking rates and a structurally deficient Medicaid budget. They have an opportunity to address both at once, putting the Mountain State on more stable footing for years to come, but will they have what it takes to put West Virginia’s future before their own political futures and do what’s best for the state?

I, for one, certainly hope so.