Overdose Deaths Out of Control in West Virginia

A report out this week finds that West Virginia leads the nation in prescription drug deaths.  This may be unsurprising as many of us know someone who has fought addiction to pain-killers, but what is surprising is that overdose deaths in West Virginia have increased by more than 600 percent since 1999! This is an issue that has reached epidemic proportions and the answer is investing in our children through better education and health, not building more prisons.

The report from the Trust for America’s Health shows that West Virginia leads the country in overdose deaths. Obviously this is not something to be proud of in any way, shape or form but as fanatic as we Americans are over sports, we have a tendency to take any opportunity to chant “We’re number 1!” and inevitably some false sense of pride takes over. 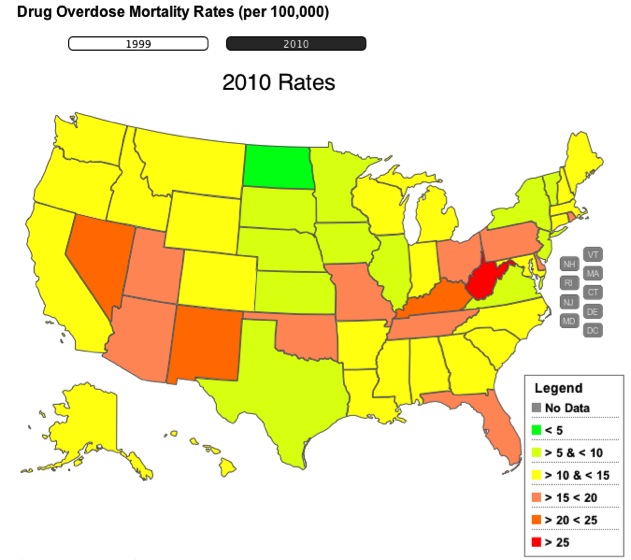 However, we really need to frame it like it is – West Virginia is the worst in the country at controlling prescription drug abuse.  And this isn’t some sort of statistical anomaly either.  It’s not like we’re comparing the average number of fingers per person across states where the difference is hardly perceptible but since it’s a ranking there will always be a 1st and a 50th.  West Virginia has a rate of 28.9 deaths per 100,000 people, that’s over 500 deaths a year in West Virginia due to prescription drug misuse, nearly 50 percent more than the number of people who die in car accidents in the state!  Meanwhile, North Dakota, with the lowest rate in the country, has 3.4 deaths per 100,000 people, or one-eighth the rate in West Virginia. Clearly, something is wrong.

At this point it would be very easy to pile on to all of the other health and well-being statistics where we’re also the bottom of the barrel — things like obesity, smoking, chronic heart disease, diabetes, lack of physical activity — and chalk it up as “just the way it is.”

It may be the way it is today but it isn’t the way it always has to be.  There are clear steps that we must take as a state to get ourselves out of these messes.  We must invest in our future by focusing on good quality education, by focusing on creating a broad range of jobs in new sectors not dependent on a single dying industry, by focusing on health by building safe communities with parks and playgrounds and walkable sidewalks.

The key here is investment. Investing in the future of this state requires time, effort, and money.  Better schools and healthier communities don’t come from cutting corporate taxes. Yet, surprise! More business will come to West Virginia when we have a healthier, better-educated workforce.

Instead of building better schools though, we’re building more prisons to house the drug addicts. Instead of creating better substance abuse treatment policies, we’re cutting mental health funding to save money in the short term.

Obviously these steps have lead us nowhere. Isn’t it time for less “instead” and more invest?