First, the op-ed stated the West Virginia’s prevailing wage has increased 24% since 2008, outpacing wage growth in every other industry in state. This simply is not the case, and a simple check of the statistics proves it to be false. First, the state doesn’t have one prevailing wage rate, it has 2,640, for 48 different occupations in 55 counties, and they have all changed at different rates, some more than others. But for simplicity’s sake, we can average the 48 occupations together in one county. So, for Kanawha County, the average prevailing wage rate has increased from $24.81 in 2008 to $29.49 in 2015, an increase of 19%. Why is it not 24%, like in Hoylman’s op-ed? Because the op-ed is including fringe benefits. For Kanawha County, including fringe increases the growth rate to 26%, since, as everyone is familiar with, health care costs are growing faster than the overall economy. 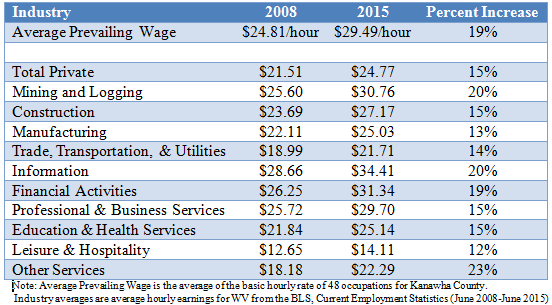 Next, the op-ed goes after fringe benefits themselves, arguing that they, too, are inflated compared to the rest of the economy. The op-ed states that under prevailing wage, construction workers are mandated, “to be paid anywhere from 50 to 80 percent of their pay package for benefits,” while the Census Bureau shows that under normal circumstances, “employee benefit packages equal roughly 25 percent of their pay.”

Either through a misunderstanding or ill intent, the op-ed is twisting the definition of pay to make prevailing wage look inflated. According to the Census, in March 2015, employer costs for employee compensation averaged $33.49 per hour, which included $22.88 in wages and salaries, and $10.61 for benefits. So, of total compensation, wages were 68% and benefits were 32%.

The op-ed also gives an example of a flag-waver earning $42/hour (including benefits, if the op-ed didn’t make that clear), when in the “market” unskilled labor earns around $10/hour, as an example of the prevailing wage gone wild. First off, flag wavers are generally found on road construction projects, which, since they are largely federally funded, are subject to the federal prevailing wage law. West Virginia’s law has no relevance there. But the author may be surprised to learn that in the “market,” according to BLS statistics, only 10% of “construction laborers” earn $10/hour or less.

Regarding the recently passed law, and the controversy over its implementation, the op-ed states that the law specifically cites how to calculate the new wage, when in fact, the law simply states that Workforce WV shall determine a new methodology “as evidenced by all appropriate economic data, including, but not limited to, the average rate of wages published by the U. S. Bureau of Labor Statistics,” with no specifics at all.

Contrary to the rhetoric, the facts make it clear that West Virginia’s prevailing wage law is a good deal for the state, and helps create a more productive and efficient construction industry. The savings and benefits promised to states that repeal or weaken their prevailing wage laws have always failed to materialize. Doing so in West Virginia would hurt local workers, send tax dollars out of state, and provide the public with a poorer return on its investment.

Correction: The op-ed author is Hoylman, not Holyman.