As the extended special session drags on, with no agreement on a tax bill yet, the House has made adjustments to the governor’s budget plan submitted at the beginning of the special session.

To recap, after vetoing the budget passed during the regular session, which was balanced by taking $90 million from the Rainy Day Fund and major cuts to Medicaid and higher education, the legislature went into a special session and the House, the Senate, and the governor have all been in a stand off over personal income tax cuts and sales tax increases ever since.

With no deal on revenue, the governor introduced a new budget with HB 115. HB 115 made a number of cuts compared to the governor’s original proposal, including reducing the Save our State Fund to $15 million and cutting higher education by $5.4 million. At the time, HB 115 would have required the legislature to raise about $260 million in revenue to balance the budget.

Yesterday, the House introduced a committee substitute for HB 115, with $78 million in further cuts. While the full text of the bill is still not available, a summary was posted online.

Here are the major changes in the committee substitute for HB 115 compared to the governor’s version.

The Senate also introduced their plan for the budget through an amendment to SB 1013. The Senate’s bill also makes cuts to the Governor’s special session proposal, but goes much further than the House, cutting by $254 million.

Here are the major changes in the amendment to SB 1013 compared to the Governor’s introduced version of HB 115. 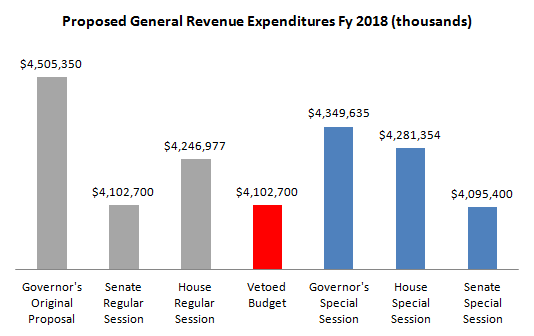 Last night, the Senate passed an amended version of SB 1013, with smaller cuts than the version mentioned above, due to improved revenue forecasts. The Senate budget, balanced with millions in cuts, was passed in response to the failure to come to an agreement on a tax reform package that include major cuts to the income tax. Compared to the Governor’s special session budget bill, the version passed by the Senate includes: 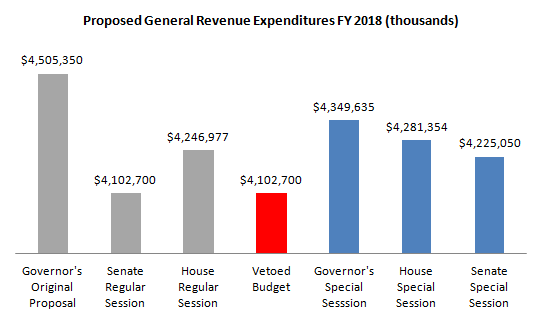