With revenue collections running $49 million below estimates, the Senate Finance Committee has introduced a bill to enact immediate spending cuts, with the full Senate expected to vote on the bill today. Lower than expected personal income, sales and severance tax revenues have contributed to the revenue shortfall prompting the budget cuts. 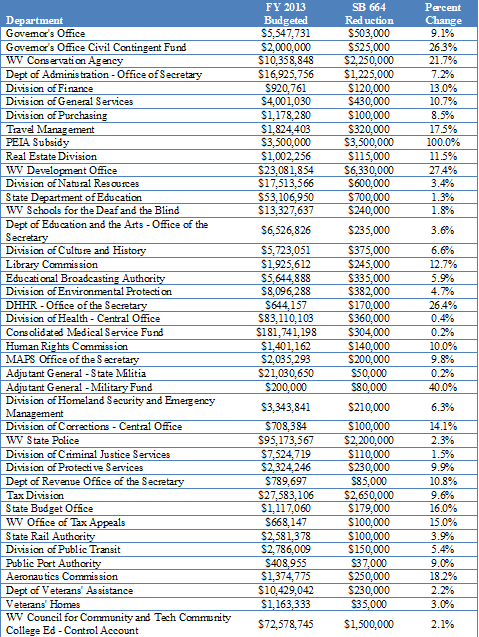 Unlike the $75 million budget cut in the upcoming FY 2014 budget, in which each agency saw a 7.5% cut, this $28 million cut is distributed unequally throughout selected areas of the budget. More than 1/5 of the $28 million in cuts will come from the WV Development Office, which will see a $6.3 million cut, a 27% decrease from the original appropriation. $4.3 million of the Development Office’s cut will come from Local Economic Development Assistance.

While most of the listed cuts will come from the personal services and employee benefits area of the agency budgets, some programs which receive line item funding will also be affected. These include GO HELP in the Governor’s Office, Teacher Mentor in the Dept of Education, the Center for Professional Development in the Dept of Education and the Arts, Emergency Response Entities in the Division of Health, and Community College Workshop Development and WV Advance Workforce Development in Higher Education.

These budget cuts are occurring despite the fact that the state is currently sitting on nearly $1 billion in rainy day funds, after adding nearly $100 million to the funds in 2012. And while revenues are faltering across the board, revenue projections show the personal income tax as the only source of revenue growth. And even as a lack of revenue has forced multiple budget cuts, the corporate net income tax is on schedule to be cut once again in 2014, and the business franchise tax cut in 2014 and eliminated in 2015, which would put business tax collections at at 25 year low.