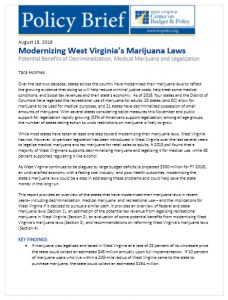 Over the last two decades, states across the country have modernized their marijuana laws to reflect the growing evidence that doing so will help reduce criminal justice costs, help treat some medical conditions, and boost tax revenues and their state’s economy.

As of 2016, four states and the District of Columbia have legalized the recreational use of marijuana for adults, 25 states (and DC) allow for marijuana to be used for medical purposes, and 21 states have decriminalized possession of small amounts of marijuana. With several states considering ballot measures this November and public support for legalization rapidly growing (53% of Americans support legalization) among all age groups, the number of states taking action to undo restrictions on marijuana is likely to grow. Read PDF of report.

While most states have taken at least one step toward modernizing their marijuana laws, West Virginia has not. However, bi-partisan legislation has been introduced in West Virginia over the last several years to legalize medical marijuana and tax marijuana for retail sales to adults. A 2013 poll found that a majority of West Virginians supports decriminalizing marijuana and legalizing it for medical use, while 46 percent supported regulating it like alcohol.

As West Virginia continues to be plagued by large budget deficits (a projected $300 million for FY 2018), an undiversified economy with a fading coal industry, and poor health outcomes, modernizing the state’s marijuana laws could be a step in addressing these problems and could help save the state money in the long run.