Blog Posts > Medicaid Turns 50: How the Program Has Helped West Virginians in the Last Half Century
July 28, 2015
WVCBP

Medicaid Turns 50: How the Program Has Helped West Virginians in the Last Half Century

On July 30, 1965 – fifty years ago – President Lyndon Johnson signed a piece of legislation into law that would one day provide assistance to over 70 million people across the United States. Since its adoption, Medicaid has provided health coverage to the states’ most vulnerable populations.

Medicaid directly impacts more than 530,000 West Virginians by providing health coverage to low-income seniors, children, and people with disabilities and by providing parents and other adults economic security through health coverage that protects them from medical debt and allows them to remain healthy and work. 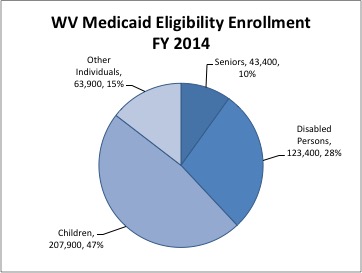 Medicaid is also important to the state’s economy, providing thousands of jobs in the health and long- term care sector and indirectly supporting local businesses where workers spend their money.

In celebration of this influential program that has helped so many West Virginians in need, we should reflect on some of Medicaid’s successes.

The Affordable Care Act (ACA) of 2010 gave states the option to expand their Medicaid programs to include individuals between the ages of 19 and 64 who have incomes at or below 138 percent of the Federal Poverty Level.

Governor Tomblin announced West Virginia’s expansion of the program in May 2013. Through the end of fiscal year 2014, over 130,000 individuals received Medicaid coverage as a result of the program’s expansion. While the rate of uninsured non-elderly adults remains relatively high at 20.7 percent, that rate has dropped by 6.7 percent since the 2013 expansion.

Medicaid is primarily a health insurance program for low-income children. More than half of all Medicaid beneficiaries are children. Medicaid ensures that children get screening to catch health and developmental problems early. This is especially important for West Virginia because of its high rate of child poverty.

207,900 children in West Virginia receive health care through Medicaid. That means that about one in two, or almost 50 percent, of kids can see a doctor and receive the care that they need for healthy development, like vaccinations and screenings, all because of Medicaid. Along with CHIP, Medicaid has significantly reduced the number of uninsured children in West Virginia. Only 5.3 percent of the children in our state remain without insurance.

Medicaid also has a number of long-term benefits for kids. Children who are eligible for health coverage through the program are more likely to do better in school, miss school less often, are more likely to finish high school, attend college and finish college, have fewer emergency room visits and hospitalizations as adults, and earn more as adults.

The significant federal funding allows Medicaid to support West Virginians during difficult economic times. It is a counter-cyclical program, meaning it grows to meet the need when the economy is in a downturn and residents face job loss or economic hardship. On several occasions, leaders at the federal level increased federal Medicaid contributions to help states manage enrollment growth even when states experienced declining revenues. 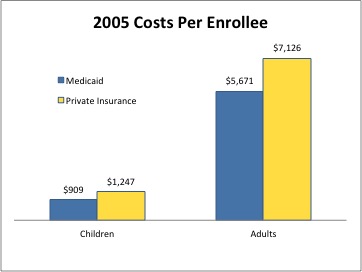 Medicaid has earned a well-documented reputation over the years by helping some of West Virginia’s most vulnerable residents access necessary health care services. In the ever-changing health care and economic landscape it offers a stable source of care for people in need while delivering critical financial resources that ripple through the state’s health care system. West Virginia’s leaders can find ways to build upon the past successes of Medicaid in ways that can also help West Virginians who remain uninsured receive better access to health care.

To learn more about Medicaid in general, visit CBPP’s website.