Here’s an article that appeared in the Gazette about the strain Medicaid is putting on the state’s budget. Due to the loss of stimulus funds, the declining federal match rate (which is tied to rising income in the state), and rising health care costs, state officials are scrambling to find a way to keep Medicaid funded. Right now, the state is facing a projected $170 million shortfall in Medicaid funding for FY 2014, after various spending cuts reduced the shortfall from $200 million.

What’s missing from the conversation about funding Medicaid is a discussion about the other side of the budget coin – revenue, and in particular,  business tax cuts. While there is plenty of concern over how to keep Medicaid funded without neglecting the state’s other needs, the lost revenue from the business tax cuts that started in 2006 with the Tax Modernization Project have remained the elephant in the room.
Since January of 2007, the business franchise tax and corporate net income tax rates have been dropping, costing the state millions in revenue each year. The estimates for FY 2013 show that revenue from these two taxes is nearly $100 million below their FY 2006 levels, a decline of nearly 30%.
While the recession played a role in declining revenues in recent years, the decline in corporate income and business franchise tax revenue isn’t entirely attributable to the recession. After falling during the recession, both personal income and sales tax revenue have increased since FY 2006, as Figure 1 below shows.
Figure 1: Percent Change in Revenue since FY 2006 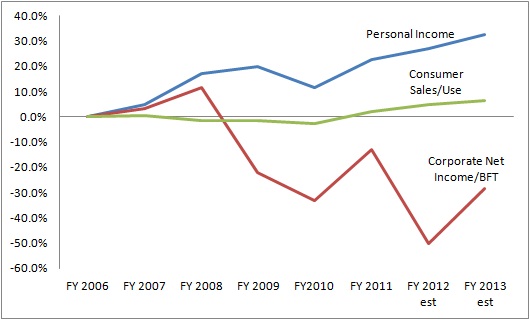 Source: WV Department of Revenue
According to the WV Department of Revenue, these tax cuts have will have reduced revenue by a total of $205 million between 2009 and 2013. But they are not over yet. The rates are scheduled to continue to fall for another 3 years, costing the state even more revenue. As the figure below shows, the tax cuts will have cost the state another $637 million between 2014 and 2017, and nearly $200 million per year when full enacted (figure 2)
Figure 2: Revenue Impact of Corporate Net Income and Business Franchise Tax Cuts 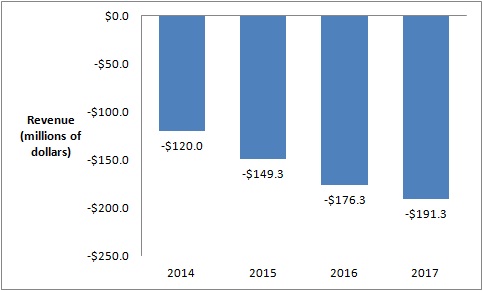