Blog Posts > Medicaid Actuary Report Only Paints Half of the Picture
May 10, 2013
WVCBP

Medicaid Actuary Report Only Paints Half of the Picture

Last week, Governor Tomblin announced that West Virginia would be expanding Medicaid as part of the Affordable Care Act.  The decision came after a report issued by CCRC Actuaries estimated that expanding Medicaid would provide health insurance coverage to an estimated 91,000 West Virginians. Over the next ten years (2014 to 2023), the report estimates that Medicaid expansion will bring in about $5.2 billion in federal dollars to the state while costing the state only $375 million.

While these figures cleary show that expanding Medicaid is a bargain (it would be like paying $375 for $5,200 in return), it actually won’t cost anything near $375 million. That’s because the CCRC report does not calculate the full expected impact of Medicaid expansion on West Virginia’s economy. Increased tax revenue, job creation, increased financial stability, and not to mention improved health outcomes, could save the state money. While the report does cite an Urban Institute study that shows the state will save an estimated $281 million in uncompensated care, this amount doesn’t show up in CCRC’s final cost estimates.

Other states have even estimated that expanding Medicaid will in fact result in overall savings to the state budget.  For example, Oregon estimated that expanding Medicaid would result in a net savings of $79 million through 2020 even after considering the nearly $600 million they would spend in increasing coverage.  Much of the savings would come from nearly $350 million in additional tax revenue due to increased economic activity.

Our westerly neighbor and its Republican Governor John Kasich came to a similar conclusion, figuring that Medicaid expansion will net the state $1.8 billion over 10 years while creating more than 28,000 jobs.  As the Ohio Health Policy Institute stated in its analysis, “Put simply, Medicaid expansion pays for itself and creates a positive state budget impact.”

Another question the CCRC report generates is how they came to the estimate that only 91,000 additional West Virginians will gain coverage.  As the graph below shows, the CCRC report is on the lower end of other estimates, including our own from last October and the Urban Institute’s study from 2010. 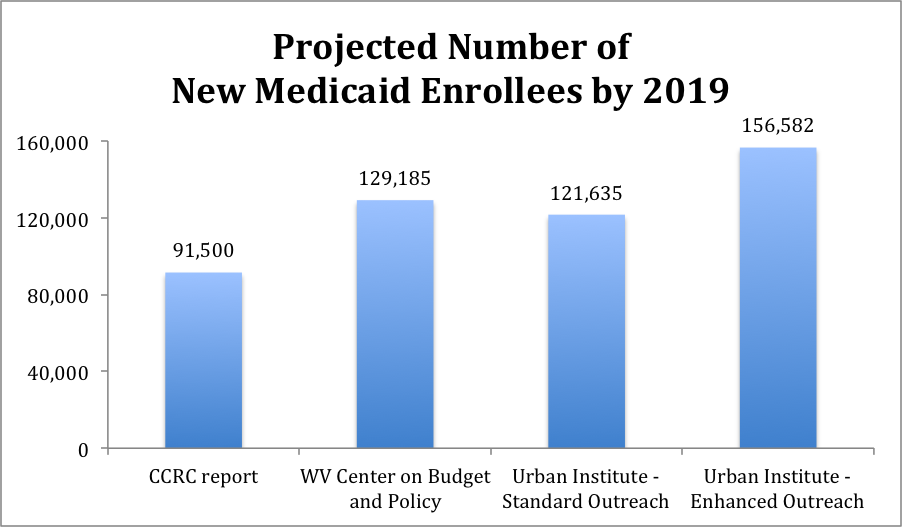