For Immediate Release
Media Contacts: Caitlin Cook (304) 543-4879
(Charleston, WV) – The lowest-income West Virginians pay 21 percent more in taxes as a percent of their income compared to the state’s wealthiest residents, according to a new study released today by the Institute on Taxation and Economic Policy (ITEP) and the West Virginia Center on Budget and Policy.
The study, Who Pays? A Distributional Analysis of the Tax Systems in All 50 States, analyzes tax systems in all 50 states. The analysis evaluates all major state and local taxes, including personal and corporate income taxes, property taxes, sales and other excise taxes. Overall, the poorest 20 percent of West Virginians pay 9.4 percent of their income in state and local taxes, compared to 7.4 percent for the top one percent in the state.
“The recent federal income and corporate tax cuts have benefited the wealthiest West Virginians the most,” said Sean O’Leary, senior policy analyst of the West Virginia Center on Budget and Policy. “It’s not unreasonable to ask the highest-income residents and corporations to pay their fair share of state and local taxes.”
West Virginia’s tax system is regarded as regressive because the lower one’s income, the higher one’s effective tax rate. While West Virginia has a progressive personal income (meaning the higher one’s income, the higher one’s effective personal income tax rate), it also, like most other states, relies heavily on the more regressive sales and excise taxes to raise revenue. Low-income West Virginians pay up to 6.6 percent of their income on sales and excise taxes, while the wealthiest in the state pay less than one percent of income in state and local sales taxes. 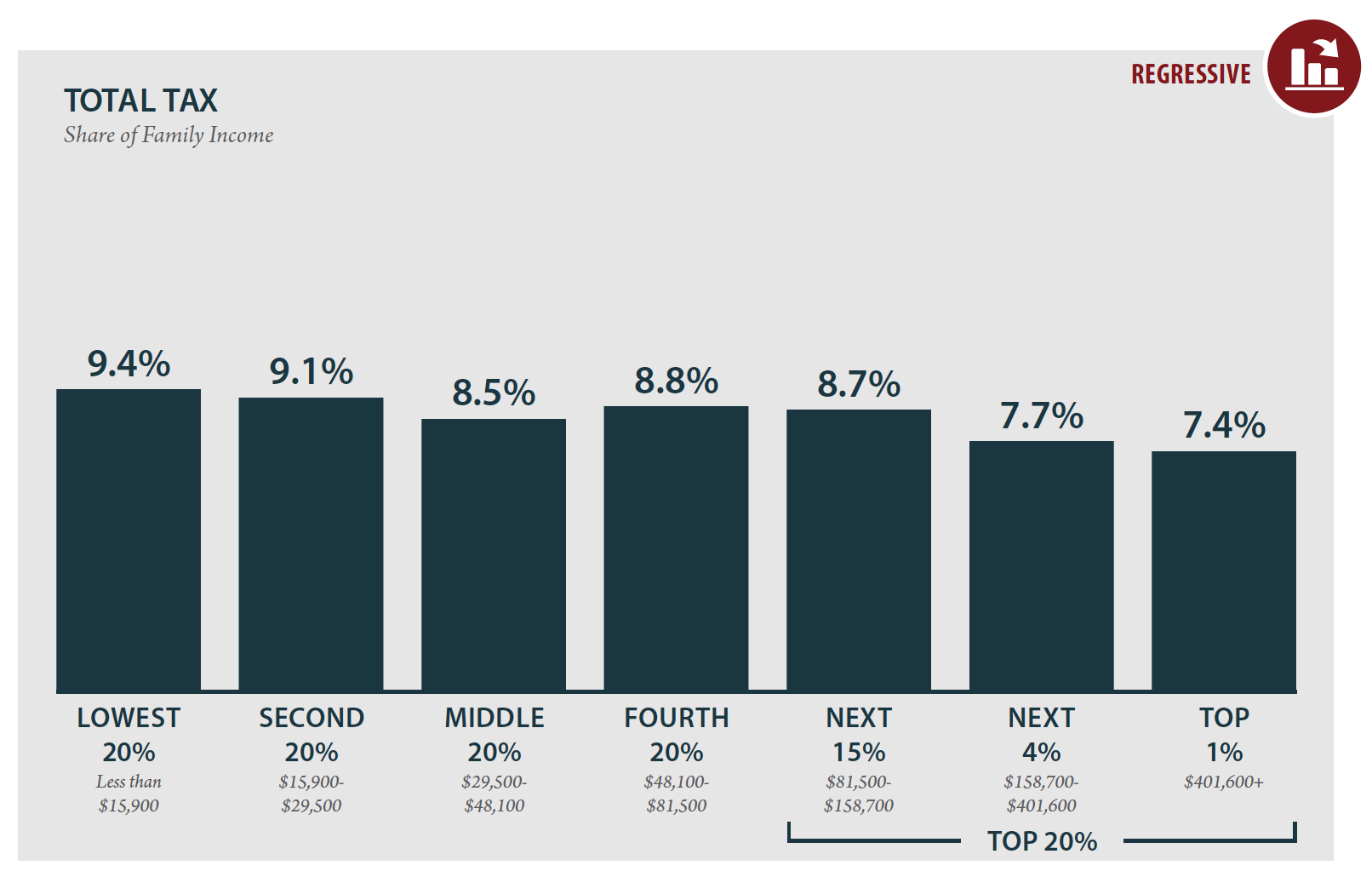 Download a Who Pays? breakdown on West Virginia state and local tax.
Anti-tax advocates across the country and in West Virginia continue to push for tax policies that reduce tax rates for the wealthy and businesses. But there is a growing movement against this agenda as the public recognizes continual tax cuts for the wealthy and corporations mean less money to adequately fund our children’s education, our parks and public spaces, our infrastructure and other basic services.
Recent efforts to eliminate the West Virginia’s income tax and repeal the property tax on business personal property would not only cost the state millions in revenue, but would also make the state’s tax system even more regressive.
As the Who Pays? study shows, broad-based graduated personal income taxes are the most equitable way to raise revenue. Given that low-income people are paying 21 more of their income in taxes than the richest West Virginians, lawmakers should carefully weigh the distribution of their taxes, as measured by Who Pays?, when considering changes to their tax code.
There’s also a more practical reason for West Virginia and all states to be concerned about regressive tax structures, according to ITEP. If the nation fails to address growing income inequality, states will have difficulty raising the revenue they need over time. The more income that goes to the wealthy (and the lower a state’s overall tax rate on the wealthy), the slower a state’s revenue grows over time.
“Rising income inequality is unconscionable, and it is certainly a problem that local, state and federal lawmakers should address,” said Meg Wiehe, deputy director of ITEP and an author of the study. “Regressive state tax systems didn’t cause the growing income divide, but they certainly exacerbate the problem. State lawmakers have control over how their tax systems are structured. They can and should enact more equitable tax policies that raise adequate revenue in a fair, sustainable way.”
West Virginia has the 37th most unfair state and local tax system in the country. Explore state-by-state Who Pays? data on this interactive map.
The West Virginia Center on Budget and Policy is a public policy research organization that is nonpartisan, nonprofit and statewide. The Center focuses on how policy decisions affect all West Virginians, especially low- and moderate-income families.