Last week, the governor called the legislature back into special session to continue work on the state budget. The actual budget bill, however, was not part of the call, instead the intention was for the legislature to vote on a compromise tax plan that would influence how the budget was finalized. The version of the plan ( SB 1004) unveiled during the special session was very similar to the plan introduced on the last night of the session, which would have made the state’s budget crisis worse, while shifting the state’s tax load onto working families while giving wealthy families a tax break.

The tax plan passed the Senate by a vote of 32-1, but was killed by the House, prompting a 10-day recess for the legislature. The bill, while currently dead, is still heavily favored by the Senate and the Governor and likely still will be the basis for the budget deal.

The tax plan introduced during the special session and passed by the Senate would make major changes to the state’s tax system. The plan includes changes to the severance tax, major income tax reductions, a sales tax increase with base broadening, a temporary tax bracket for high-incomes, a temporary increase in the corporate net income tax, and increases in motor fuel taxes and Division of Motor Vehicle fees dedicated to the state’s roads. Altogether, these changes would decrease General Revenue Fund collections by $52.2 million in the first year of full implementation, and lower General Revenue collections even further once the temporary corporate net income and high-income tax bracket expire. The tax plan would also increases State Road Fund Revenues by $118 million.

The table below breaks down the tax changes in SB 1004. The centerpieces of the plan are raising revenue with an increase to the sales tax and temporary taxes on businesses and high-income earner, which are almost entirely offset by major cuts to the income tax. The tax plan lowers revenue collections in future years even further since both the increased corporate net income and high-income tax expire by FY 2020, and the personal income tax is phased out over the coming decades. 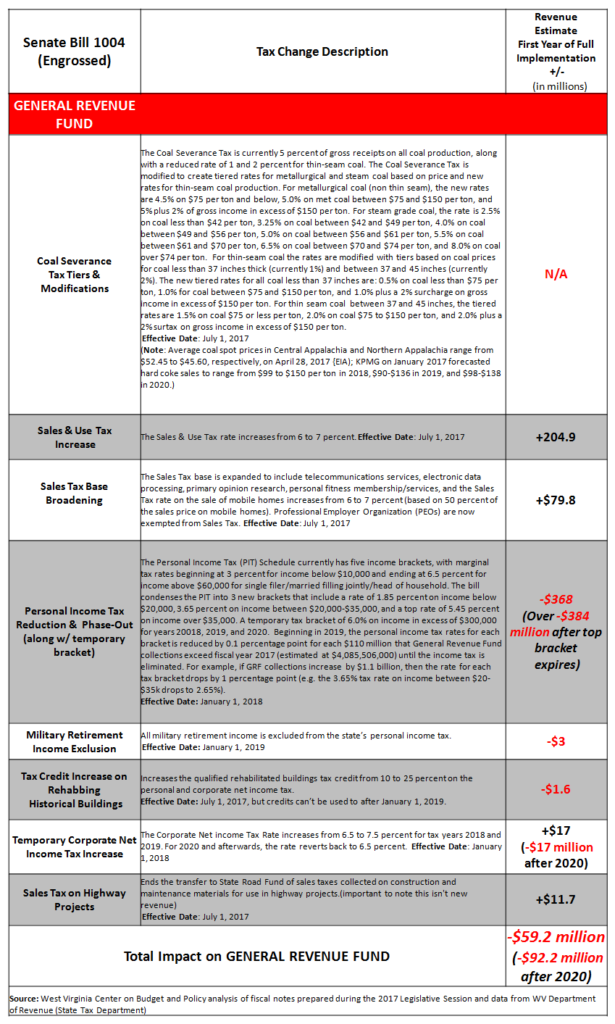 Because the sales tax increase has an earlier effective date than the income tax cut, the tax plan would increase General Revenue Fund revenues by $135.3 million in FY 2018, but would reduce revenue by $59.2 million in FY 2019 once the income tax cut is in effect for the full fiscal year. And once the temporary corporate net income and high-income tax bracket expire, the plan would result in a net revenue loss of $92.2 million. 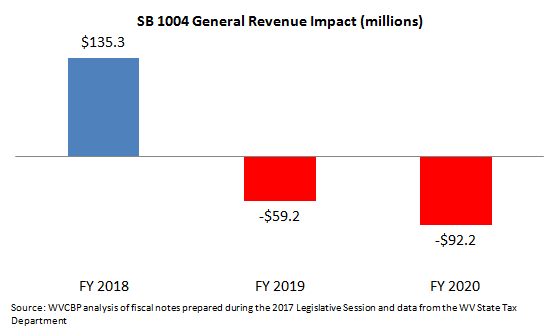 Like previous versions of the compromise tax plan, this plan would not only worsen our state’s budget problems, it would do so by increasing taxes on 80 percent of West Virginia households making below $84,000, while lowering them on the 20 percent of West Virginians that make more than $84,000. Those making on average $11,000 would see their annual taxes rise by $123 or 1.1 percent of their income, while those making on average $778,000 (top 1 percent) would see an average tax cut of $2,626. Once again, the latest compromise tax plan is a plan that raises taxes on most West Virginians to give large tax breaks to those that need them the least. 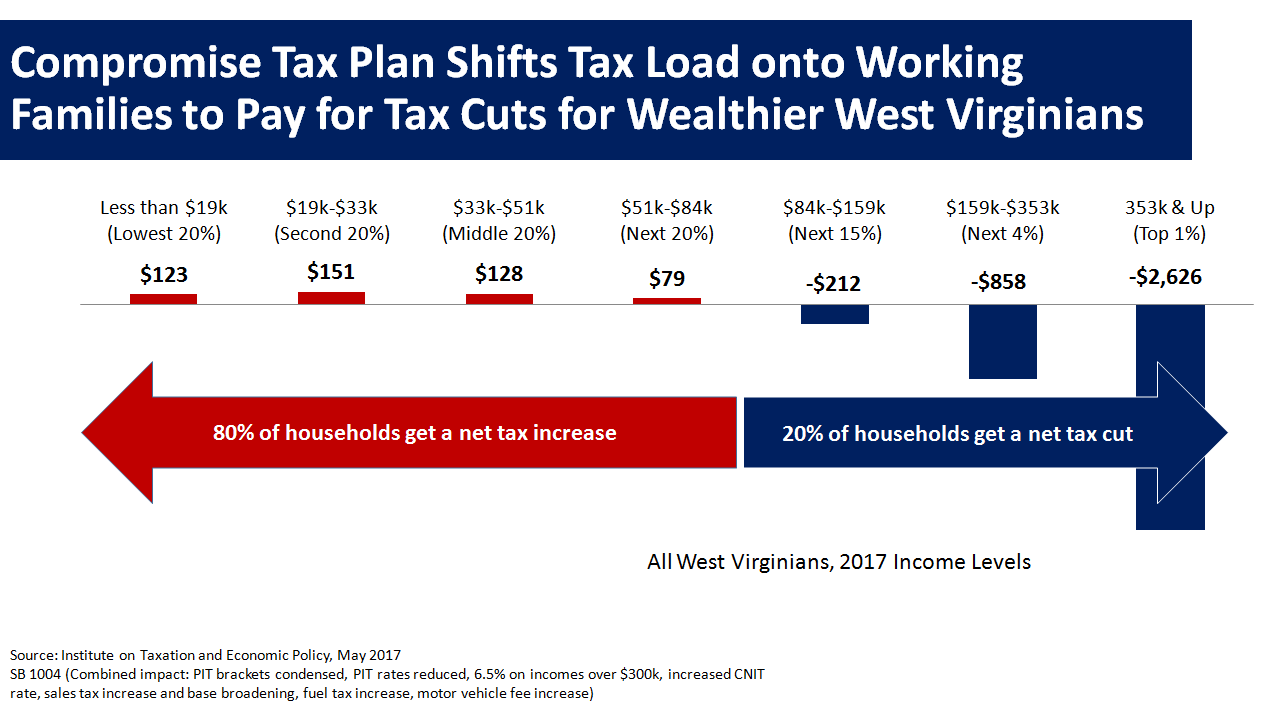 The table below breaks out the tax changes for each income group in West Virginia. It includes the full-implementation of income tax reductions in 2018 and the 6.5% rate on incomes over $300k. While every income group sees an increase in their taxes from the proposed changes to the sales tax, motor fuel tax/DMV fees, and the increased corporate net income tax, the large personal income tax reductions mostly goes to the top income groups. In fact, approximately 60 percent of the more than $300 million in income tax cuts go to the top 20 percent, according to the Institute on Taxation and Economic Policy. This is why higher income West Virginians are estimated to receive an overall reduction in taxes while low and middle-income West Virginians see an increase in taxes. 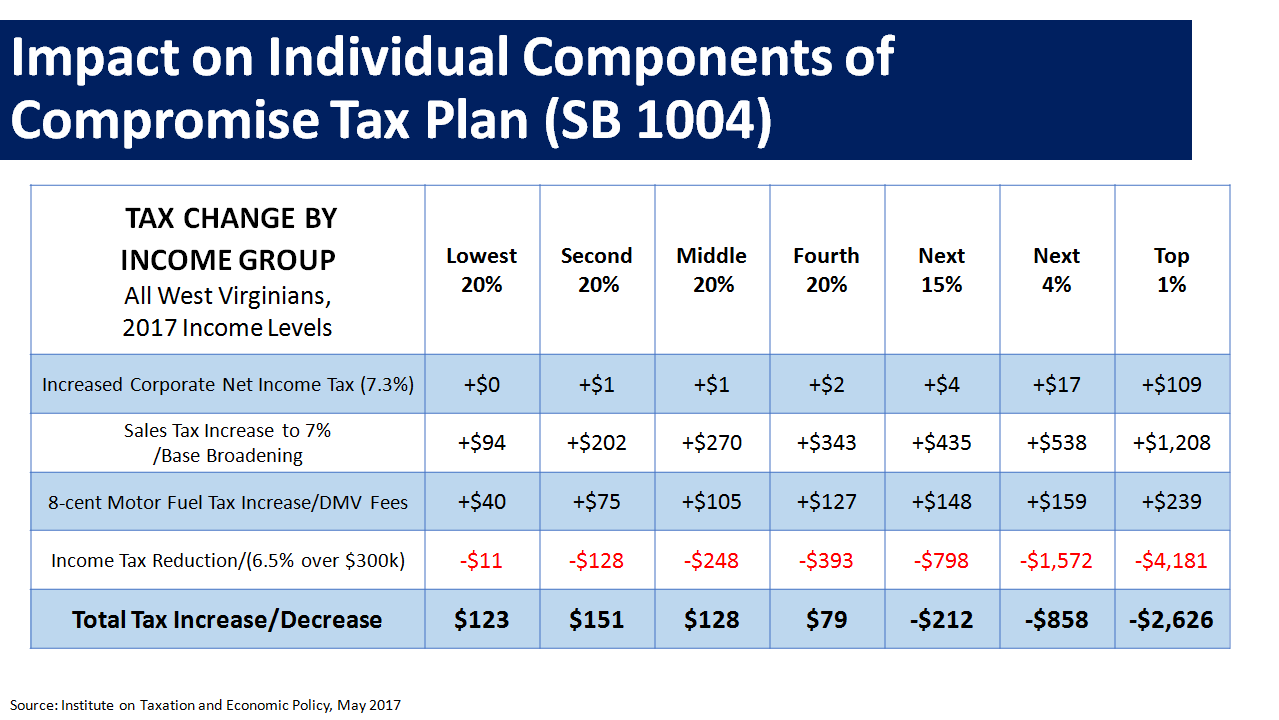 The two temporary provisions of the tax plan, the increased rate for the corporate net income tax and the 6.5% income tax on incomes over $300,000, expire after 2020. Taking out these two parts of the plan largely benefit the top 1% of West Virginians, and do little for the other 99%. Once these two provisions expire, the overall tax cut for the top 1% of West Virginians will increase from $2,626 to $4,134. 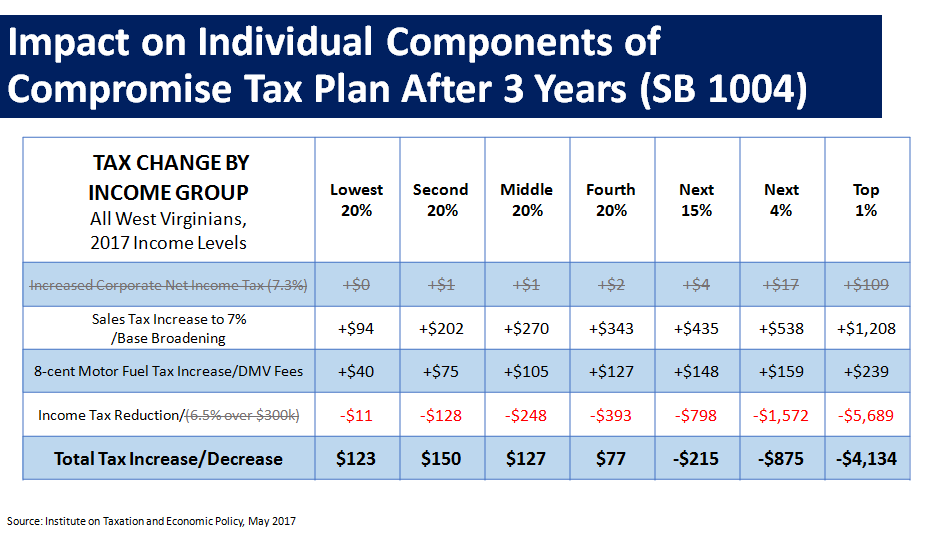 As noted in previous tax proposals, these changes will not only exacerbate income inequality and make it harder for low- and middle-income families to make ends meet, but they will lead to large future budget shortfalls that will damage our state’s ability to invest in the building blocks of our state’s economy. Cutting taxes on the wealthy, while planning for further tax cuts for the wealthy in the future, is not going to pave a strong future for the state. Instead of moving in this direction, lawmakers need to work together to ensure tax reform is addressing the state’s looming budget crisis together not making it worse.