The 2015 edition of the Tax Foundation’s State Business Tax Climate Index came out earlier this week. West Virginia ranked 21st this year, showing improvement improvement over the past several years. And while some in the state put a lot of stock in our rank, we should know by now that the index is nothing more than a transparent justification for lower taxes and smaller government, with no real policy value.

I’ve gone over the problems with these types of rankings before, but since they keep getting attention, it’s worth going over them again. With the Tax Foundation’s Index, the main problem is that it’s completely arbitrary and has virtually  no relationship to what businesses actually pay in one state versus another. States’ that lack a corporate or personal income tax are rated better than state’s with progressive marginal income taxes, even if those states’ overall business tax burden is lower. The index weighs property taxes the least even though they are the largest tax for most businesses. So for the Tax Foundation’s top 10 states (those with the most competitive tax systems on their measure), only Utah and Indiana are among the 10 states with the lowest taxes on business according to the Council on State Taxation, which actually measures the amount of taxes paid by businesses.

The index doesn’t measure tax levels, instead it measures “tax competitiveness” but there is no evidence that what they define as competitive makes a difference to businesses. But when stating the importance of a state’s competitiveness, they argue that, “a state with lower tax costs will be more attractive to business investment,” even though their index doesn’t actually measure tax costs. Instead, the index adds together different features of the tax code that may or may not influence businesses, and arbitrarily weights them.

The index also completely fails to predict growth. I’ve done a number of blog post on the index from various years showing that there is no correlation between a state’s rank and it employment growth, gdp growth, wages and any number of economic indicators. And improving a state’s rank doesn’t lead to growth. I recently went back to the 2010 rankings, South Dakota ranked #1, but only 30th in job growth since 2010, while California ranked 48th in the index and 3rd in job growth. 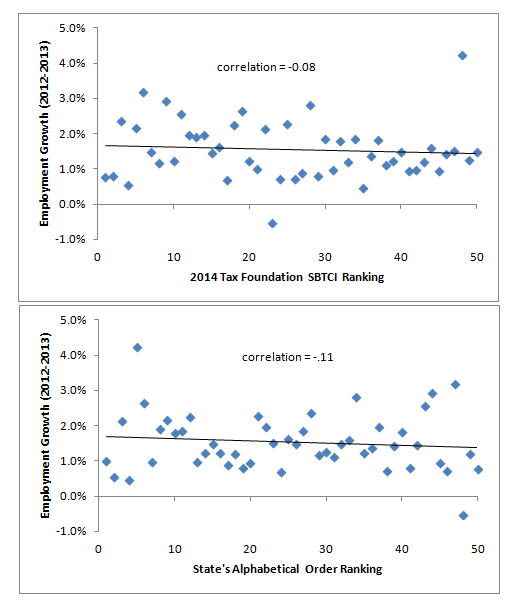 West Virginia has substantially improved our score in recent years by cutting the CNI and phasing out the BFT, but we have nothing to show for it. Business tax revenue is at record lows and we have had to tap the rainy day fund to balance the budget. Most if not all of our economic growth has been in the natural gas industry, which can’t be attributed to tax climate.

But the biggest problem with the whole idea of a tax climate ranking is that it perpetuates the belief that state and local business taxes are the driving force behind economic development, when the actual research shows taxes are a small share of business costs, and have little effect on investment decisions. It also neglects to evaluate the impact taxes have on public investments. West Virginia has one of the lowest percentage of college graduates in the country, which doesn’t make for a good business climate. But by pursuing business tax cuts, we have had to cut state funding for higher education, pushing up tuition costs and making college even more unaffordable.

Rankings like these are ideological, and encourage a single-minded pursuit of business tax cuts as key economic development policy, and undermine the public structures that can lead to real economic growth and prosperity.